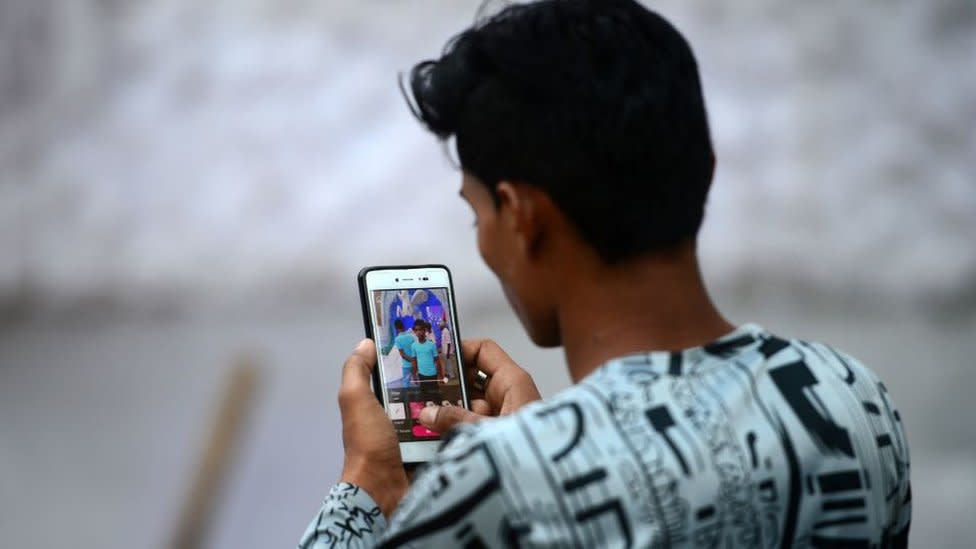 In May last year, as Muslims around the world celebrated Eid al-Fitr, several women in Pakistan were shocked.

Screenshots of photos they had posted of themselves dressed for the festival were livestreamed without their permission on YouTube by two men across the border in India.

The livestream, by Ritesh Jha and an accomplice he calls “Keshu”, was accompanied by misogynistic and Islamophobic comments and watched by hundreds.

After several users reported the stream, YouTube removed the video and the channel. The women later said they felt “unsafe” and “scared” and that their Eid had been “ruined”.

Eight months later, Mr Jha, 23, says he was “filled with hate at this time”. He claims he wanted to avenge the Hindu women whose makeover photos he spotted on social media. He did not reveal any details about Keshu.

The trolling of women – particularly those critical of Indian Prime Minister Narendra Modi and his ruling Bharatiya Janata (BJP) party – has worsened in recent years amid an increasingly polarized climate both online and offline.

As supporters of all political parties and ideologies harass women online, experts say the far right and the spread of technology have further emboldened young Hindu nationalists.

The YouTube livestreaming incident was followed by several cases of women being abused online.

The developers of two apps have shared photos of Muslim women in a mock “auction” intended to humiliate them. Hindu women critical of Mr Modi and the BJP were also the subject of a fake ‘sell’ on audio app Clubhouse, which said it had since suspended the venue and taken action against accounts linked to it . In all three cases, there was no actual sale.

After a strong public outcry, the police arrested nine people in relation to the two applications – all between the ages of 18 and 26. Most were active in social media groups where Islamophobic messages were regularly posted.

Mr Jha was also named in a police complaint over the Clubhouse mock auction and Youtube livestreaming incident, a senior police official told the BBC.

“We are investigating the matter and will take necessary legal action against him if he does not show up,” said Rashmi Karandikar, head of the Mumbai Police Cyber ​​Cell.

Experts say these are not isolated incidents.

“I would attribute this to a radical radicalization of the Hindu middle class,” says journalist and author Snigdha Poonam.

“It’s pure bigotry that comes from deep within Hindu society.”

Mr Jha’s now-deleted YouTube channel had thousands of subscribers who engaged with the anti-Muslim content he shared.

He justifies offensive jokes targeting Islamic practices as “black humor”. He also compares the live streaming of the women’s photos to “innocuous videos on TikTok or Insta Reels”.

Mr. Jha was 14 when he received his first smartphone. He says the content he then accessed was his introduction to the right-wing world.

“Thereupon, I saw memes, heard speeches by politicians who shouted that Hindus were in danger,” he says.

Partisan political debates and toxic narratives that identified Muslims as the enemy slowly turned him into a “radical”, he says.

“You start to feel like you’re being discriminated against, so much so that you start thinking about violence,” Mr Jha said.

“The pandemic has also created a feverish environment conducive to radicalization, causing millions of people to spend more time online,” says a study by the Canadian Institute for Policy Dialogue, which studies online behavior. right-wing extremists in the country.

The Indian right is also experiencing changes – many now split into two groups: the ‘trads’ and the ‘raytas’.

The trads, or traditionalists, have more extreme views and think the BJP is not right wing enough. They call their critics on the right “raytas” – a play on the Hindi idiom “rayta phailana”, which basically means to mess things up.

The Raytas say they prefer to express their opinions without adopting violence.

Abhishek Banerjee, a right-wing columnist, says it looks like divisions among those on the left.

“As the position of the right has become influential in politics and power, it is becoming more vocal and visible,” he adds.

A young Dalit man, who only wants to be called HR – the initials of his Twitter account – told the BBC how he was drawn to the world of trad.

Dalits (formerly untouchables) are the basis of an oppressive Hindu caste system.

In March 2020, HR was asked to join an Instagram group whose stated purpose was to “spread real information about Hinduism”. The person who invited him said he was impressed with HR’s ability to chat “with Muslims online”.

HR says he was happy to join because he was “proud” of the Hindu faith, but was quickly disappointed by the relentless hatred members spewed – not only against Muslims but also Dalits.

“They thought that Dalits were not Hindus, that it was okay to rape Muslim women to build a Hindu India and that even the killing of children could be justified,” he told the BBC via messages on Twitter.

HR never revealed his caste identity to the group and left him six months after his arrival.

He says he is now “fighting” against trads by flagging their handles on social media.

“Trads praise lynching, oppose both Muslims and Christians, believe in the oppressive caste system, and hate all outspoken modern women, whether Hindu or Muslim,” says writer Saniya Sayed, one of the women whose photos were uploaded to the fake auction apps.

Ms Sayed says she was often added to online shopping groups by her stalkers so she could see the objectionable comments they made about her.

Delhi police say the man who allegedly created the fake auction app was part of a trading group.

Mona Sharma, who goes by ‘rayta’, says she and other right-wing women have also been targeted by online ads because they don’t conform to their notions of how women should behave. include.

She has been abused online and her husband’s personal details have been leaked, Ms Sharma says – she adds that she herself is trolling liberals and is trolled by them on Twitter, but that is a “harmless” activity.

“For traders, modern, educated women are not Hindu enough,” she says.

The police have had limited success in disrupting this ingrained ecosystem.

Ms Poonam thinks the radicalization of Hindus is a grave danger to Indian secularism.

“When I’m on assignment, you’d be surprised how many times ordinary people keep talking about Pakistan as a model for India to follow,” she says.

“There is a strong feeling among a large section of Hindus that India should be for Hindus, and they feel more free to express it today,” she adds.

Mr Jha told the BBC his actions were “morally wrong” but said people like him were “used”.

“We don’t realize how ingrained hate is in our minds. It doesn’t benefit anyone except those running a hate agenda.”