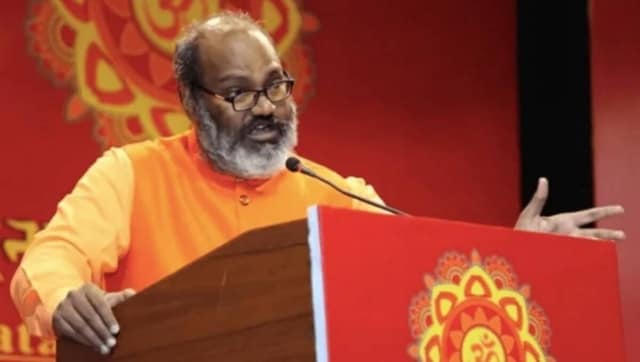 Yati Narsinghanand, who is out on bail in the Haridwar Dharma Sansad hate speech case, said Hindus must give birth to more children to prevent India from becoming an Islamic nation.

Yati Satyadevanand Saraswati, Himachal Pradesh head of Akhil Bhartiya Sant Parishad, told PTI that India is a democratic country as Hindus are in the majority.

Read more: Who is Yati Narsinghanand Saraswati, the priest behind the Delhi Mahapanchayat hate speech?

But Muslims are increasing their population by giving birth to many children in a planned way, he claimed on the first day of the organization’s three-day ‘Dharam Sansad’ at Mubarakpur in Una district of Himachal. Pradesh.

“Therefore, our organization has asked Hindus to give birth to more children to prevent India from becoming an Islamic nation,” Saraswati said.

In view of the gathering, which is being attended by Yati Narsinghanand, Annpurna Bharti and several other seers and priests across the country, Himachal Pradesh Police in a notice to Saraswati ordered him that no inciting language be used against any religion or caste.

In issuing the notice under Section 64 of the Police Act 2007, the SHO of Amb Police Station in Una District said that appropriate legal action would be taken if these instructions were not followed. were not respected.

Saraswati said India would become an Islamic country like neighboring Pakistan when Muslims were in the majority. “Therefore, our organization has asked Hindus to give birth to more children to prevent India from becoming an Islamic nation,” he added.

When asked if this would be against the national two-child policy, he replied, “There is no such law in our country requiring citizens to give birth to only two children. children”. Narsinghanand was arrested and later released on bail after allegedly holding a Dharma Sansad in Haridwar from December 17-19 last year where provocative speeches were made against Muslims.

He also participated in a ‘Hindu Mahapanchayat’ at the Burari ground in Delhi last Sunday and remarked that ‘50% of Hindus will convert’ in 20 years if a Muslim becomes Prime Minister of India and also urged the Hindus to take up arms. fight for their existence.

UNITAMS calls for reining in promoters of anti-Volker discourse