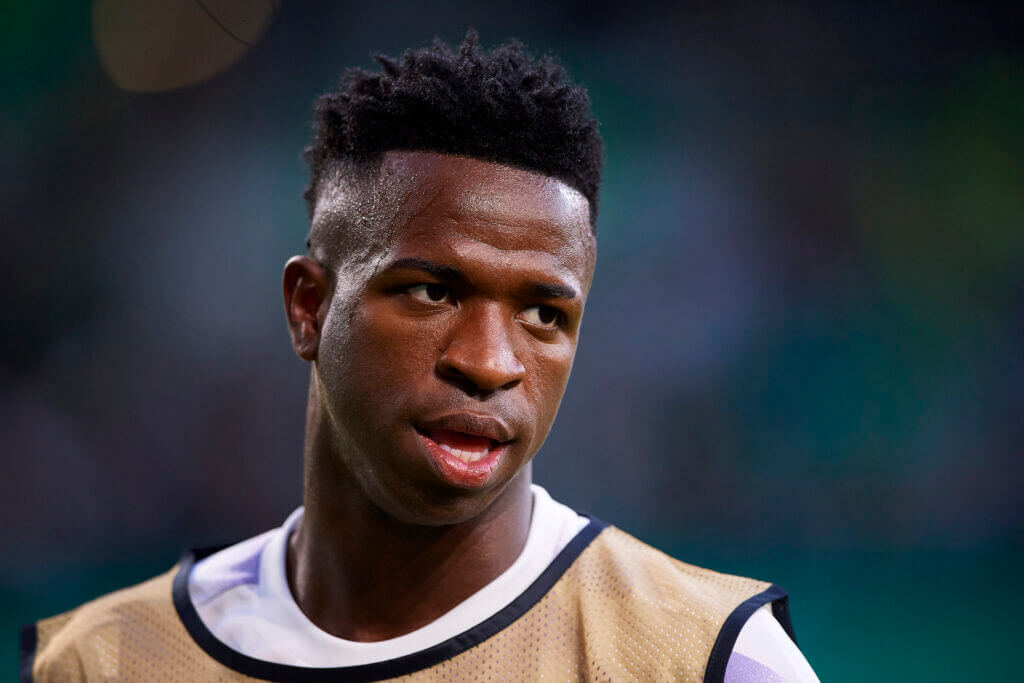 Real Madrid striker Vinicius Junior has been the victim of racist abuse ahead of his side’s derby against Atletico Madrid on Sunday.

Similar chants aimed at Vinicius were audible inside the stadium once the match started.

The Metropolitano stadium announcer calls for respect for all players on the pitch – hard to hear the msg inside the stadium with all the whistles from the crowd.

Before the game, an Atletico fan was photographed with what appeared to be a toy monkey with a Real white shirt on.

This abuse of Vinicius comes just days after Pedro Bravo, president of the Spanish Agents Association, told the 22-year-old to ‘stop playing monkey’ on El Chiringuito when talking about the Brazilian’s goal celebration .

The incident garnered widespread support for Vinicius, especially from his compatriots. Neymar, Pele and Bruno Guimaraes were among those who defended Vinicius.

Shortly before the Madrid derby kicked off, Atletico tweeted: “Countdown to the derby. Support Atleti with passion and respect for the rival!”

Speaking ahead of the game against Atletico on Saturday, Real head coach Carlo Ancelotti said: “I refer to the club’s statement and Vinicius’ statement. The focus must be on football.

“The player is feeling good and looking forward to the game and helping the team try to win it. It’s something we don’t talk about in the dressing room. The response from the player has been very good.

“I don’t think there is anything wrong with him. He plays with the joy and the quality that he has. I don’t give him any advice because I am neither his father nor his brother. I am his trainer.

When contacted, Real said they had nothing to add to their statement on Friday. It read: “Real Madrid CF condemns all types of racist and xenophobic language and behavior in football, sport and life in general, such as the regrettable and unfortunate comments made against our player Vinicius Junior in recent hours.

“Real Madrid would like to express their affection and support for Vinicius Junior, a player who sees football as an attitude towards life through joy, respect and sportsmanship.

“Football is the most global sport there is and should be a model of values ​​and coexistence.

“The club has ordered its legal services to take legal action against anyone who makes racist remarks towards our players.”

A source from the Atletico club said Athleticism: “Obviously, Atletico de Madrid condemns this type of attitude on the part of a few who do not represent anyone, and we make it clear that we are totally against racism.”

A La Liga spokesperson said: “LaLiga has been fighting against hate speech of any kind for years and very much wants the stadiums and our football to be a friendly and festive experience with no room for hate speech or gestures. “