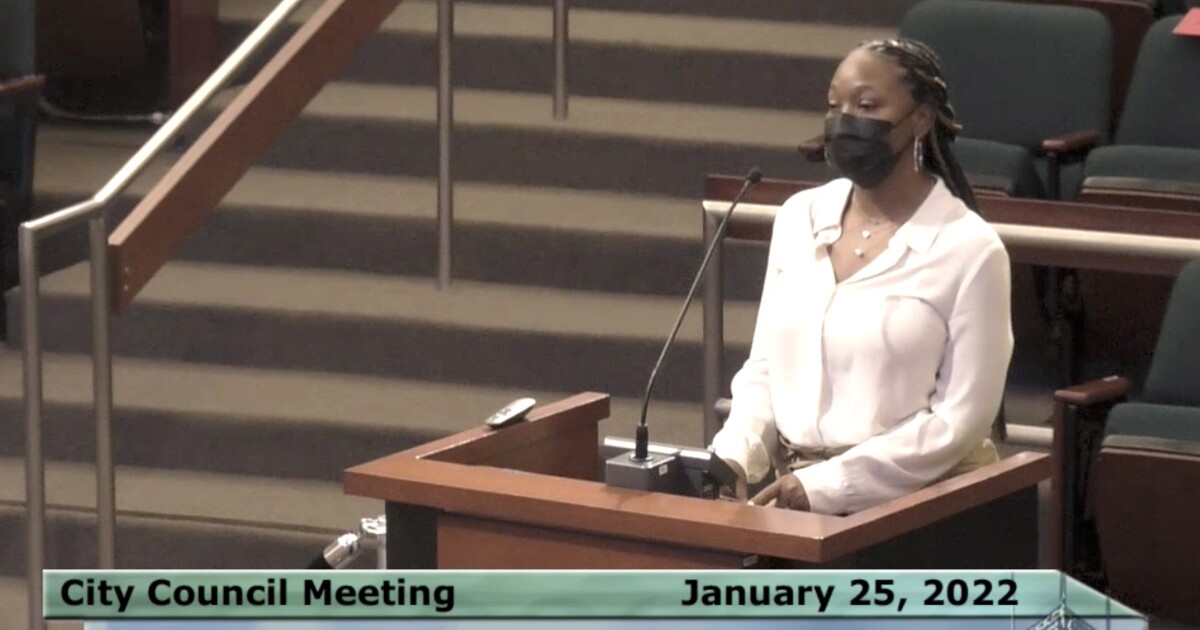 Racist comments made at a black high school basketball player during a recent game sparked outrage and calls for reform in Orange County.

A video, posted to Instagram Tuesday by the player’s mother, Sabrina Brown, begins with the player sinking a free throw during Friday’s game between his team, Portola High School, and Laguna Hills High School.

A bystander – identified by a district official as a Laguna Hills High School student – ​​references slavery and shouts, “Shack him up,” “Who let him out of his chains,” and “He’s a monkey,” among other insults.

“You may think this is an isolated incident and would like to put it behind you, but we don’t have that option,” Brown told Irvine City Council during a meeting on Tuesday. “The color of our skin does not allow us this option.”

Brown was not immediately available for an interview but allowed the Times to use his message.

She said her son, Makai, followed his Saturday morning routine of watching a match movie before training.

“He walked into my room STUNNED,” Brown wrote in the caption of his Instagram post, which had more than 75,000 views as of Wednesday morning. “What he heard 100% directed at him is contained in this video, but these disgusting racial slurs continued throughout the game. Needless to say, our family is angry.

She accused the Laguna Hills boys’ basketball program of fostering “a culture of aggression, unsportsmanlike conduct and RACISM,” adding that the harmful behavior needed to stop.

‘My family was guarded, uncomfortable and on high alert long before the video surfaced,’ she told the council, adding that any punishment given to the student ‘won’t change the vile things. that he felt comfortable enough to say – the vile things that were created by the Laguna Hills culture, and made my family feel insecure even before entering the game Friday night.

Superintendent of Saddleback Valley Schools. Crystal Turner condemned the language heard in the video and said officials have taken action.

“After a thorough investigative process that included reviewing all in-game footage and interviewing each person verified to be close to the entrant, it was determined that the unacceptable comments were made by a [Laguna Hills High] student,” she said in a statement.

The student was counseled and disciplined, Turner said. Students who witnessed the incident were informed of their responsibility to “redirect such language” and report it immediately to school administrators.

School officials discussed the incident with players and coaches during practices, Turner said, and student government officials and their adviser discussed how to make changes.

The superintendent did not comment on Laguna Hills head college basketball coach David Yates, but said “appropriate personal actions, although to be kept confidential, have taken place.”

The Saddleback Valley Unified administrator who represents the high school could not be reached for comment on Wednesday.

“I will send a letter asking for more,” she wrote. “I want to see action taken that sends a clear message to everyone that there are serious consequences to hate and racist speech. No mother should cry over how her child is being bullied.

CIF Southern Section Commissioner Rob Wigod said he was unaware of the video until contacted by The Times.

7:05 p.m. January 26, 2022An earlier version of this story stated that the CIF Southern Section would not impose discipline as the game was not part of a CIF playoff. The southern section has no jurisdiction over student behavior and discipline.

Wigod said he and his staff have been in contact with both schools and have offered to help, but the southern section would not impose sanctions or discipline as it does not have jurisdiction over individual student behavior, which is run by member schools.

He condemned the comments heard in the video and said such language was not acceptable in a game or elsewhere.

About 2% of Orange County’s nearly 3.2 million residents are black. However, they are often the group most targeted by hate crimes and incidents, which are on the rise in the county and elsewhere.

State Sen. Dave Min (D-Irvine) said the basketball game incident is part of a larger trend in Orange County, “whether it’s racist comments at meetings from the board of trustees or Nazi banners hanging from our overpasses or a Ku Klux Klan rally.”

“It’s time for Orange County to take the job seriously and carefully examine why these racist incidents continue to occur,” Min added. “We can no longer close our eyes as the rest of the nation watches in disgust.”

The comments during Friday night’s game are among several racist incidents at high schools and Orange County sporting events in recent years.

In May 2019, the Newport-Mesa Unified School District investigated a series of racist posts shared between young people, including Newport Harbor High School students, in a private Instagram group.

A member of the group asked if anyone wanted a souvenir from a trip to Alabama and Mississippi, noting, “I’ll get you a real Confederate flag.”

Another person in the group then asked, “Are they still selling black people there?”

In September of that year, racial slurs at a football game hosted by San Clemente High School against Lincoln High School in San Diego sparked an investigation by officials from both campuses.

“Our students have been subjected to anti-African American, anti-LatinX, and anti-gay verbal abuse,” Lincoln High principal Stephanie Brown wrote in a Facebook post. “African-American students in particular have been urged to return to Africa.”

Brian Levin, director of the Cal State San Bernardino Center on Hate and Extremism, said the student at the basketball game may have felt protected by being just a face in the crowd or was looking for a kind of thrill when making inflammatory statements.

But, he said, educators can turn this into a learning moment for their students.

“One thing that I think is really important is for the community to stand up and say ‘Guess what? You have crossed a line and it will not be tolerated,” he said.