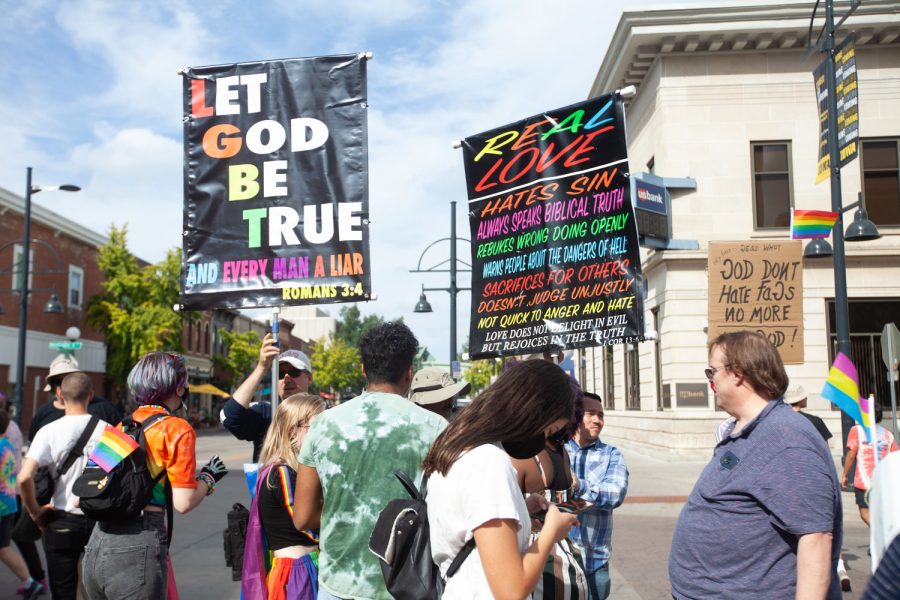 LGBTQ + students at the University of Iowa have taken the initiative to warn members of their community of anti-LGBTQ + street preachers coming to campus.

The University of Iowa campus is no stranger to street preachers who propagate anti-LGBTQ + sentiments, often coming to the campus without any prior announcements.

Because of this, members of UI LGBTQ + groups, such as the student organization Queer Liberation Front (formerly UI Spectrum) and the Gamma Rho Lambda sorority, have started warning their members themselves with group messages.

â€œQLF and other LGBTQ organizations, such as the IUF, find out just by stumbling across preachers and warning the chats online, and that’s how the information is disseminated in our groups,â€ wrote the President of the Queer Liberation Front, Simon Reichel, in an email to The Iowan Daily.

On September 20, infamous TikTok evangelical preacher, Sister Cindy, spoke on the Pentacrest about her anti-LGBTQ + views, among other topics. Her inflammatory messages are among the many students heard by preachers like her in public spaces on campus.

Vijay Pisini, a street preacher who has frequented the campus since 2016, often carries a sign with him claiming that members of the LGBTQ + community will go to hell. He, along with two other street preachers, most recently preached on the T. Anne Cleary catwalk on September 28th.

“Whenever we see [students], interact with them, preach the word, encourage themâ€¦ there is something called hard love. It’s a difficult love, â€said Pisini. “Oh, are you saying you preach hate?” No, because it’s all there, it’s in the Bible.

Pisini and his two fellow preachers made similar hateful comments during the Iowa City Pride Festival on October 2.

â€œI’m embarrassed,â€ UI Christian student Gabby Kilpatrick said of Pisini and his cohorts on September 20. â€œHe’s really embarrassing to me. I don’t appreciate seeing him here and spreading the word like that, because that’s not the right way to spread the word at all.

UI is a public university governed by the State Council of Regents. The Regents’ free speech policy allows anyone to broadcast any First Amendment protected message in public spaces and walkways.

“In order to maintain an environment that fosters the free exchange of ideas, universities should not restrict the expression of views in violation of the First Amendment to the United States Constitution,” the policy says. “It is not the responsibility of universities to protect individual members of the campus community from views they may find intrusive, obnoxious or offensive.”

“Right now I know they’re just talking and they’re just saying things,” said Amanda Miller, a bisexual UI student. “But who knows what will make them take action, and like hurting someone?”

Miller said she believes anti-LGBTQ + street preachers can encourage UI students who already have prejudices against the LGBTQ + community to harm someone in that community.

UI student Bryce Janns said he believed the university might brand some of the preacher’s subjects as hate speech.

“I firmly believe that if the university took the time to pay attention to what these people say when they meet in this institution, they would clearly see that it is by definition hate speech, very disgusting behavior, which shouldn’t be allowed to happen, â€Janns said.

Janss, a member of the LGBTQ + community and a member of the Queer Liberation Front, said when Sister Cindy arrived on campus, they were quickly warned about her by other QLF members.

â€œI think there should be a warning similar to how the university handles Hawk alerts, by email, SMS and phone call,â€ Janss said. â€œThere should be a way to let people know that these things are happening and that is in this area that they are happening. So if it’s not something you want to witness, you should steer clear of it.

According to the Department of Public Safety’s website, the university only sends Hawk alerts if there is an immediate threat to the health and safety of students.

“The Hawk Alert System is being used to notify the campus community of an event that is currently occurring or is imminently threatening the UI campus,” according to the UI’s public safety department.

Miller, who is not a member of any LGBTQ + student organization, said she was not notified of the preachers’ presence on September 20 until she passed them on her way to class.

She said she believes people should have a choice up front to expose themselves to anti-LGBTQ + rhetoric.

“The reason [LGBTQ+ students] coming to the University of Iowa is having a safe place to exist and live as they really are, â€Janss said. “And I feel like it’s enforced, I feel threatened by these individuals when they’re on campus.”

Online hate crimes against disability increase by more than 50% in one year, figures show