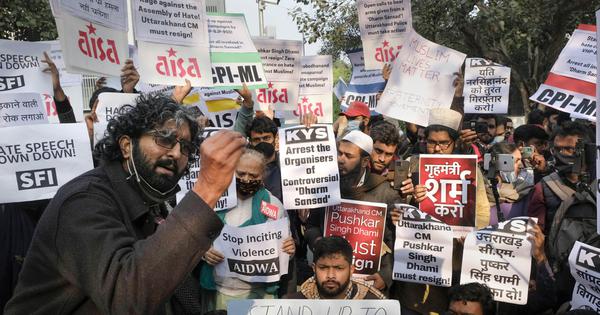 Uttarakhand police summoned two people named in the first briefing report filed in connection with the provocative speeches against Muslims at a religious conclave in Haridwar town for questioning on Tuesday, the Hindustan Times reported.

Last week, several videos were released of members of the Hindutva group and seers calling for violence against Muslims during a “dharam sansad”, or a religious parliament, which was held in Haridwar between the 17th and the 17th. December 19. Speakers at the event called on Hindus to buy weapons for genocide against Muslims.

After their comments sparked outrage, police filed an FIR on December 23 against former Waqf Shiite board chief Jitendra Narayan Tyagi. He had changed his name from Wasim Rizvi after converting to Hinduism on December 6.

Tyagi and Annapurna received a notice under section 41 (a) of the Code of Criminal Procedure, directing them to report to Haridwar Kotwali police station by January 4 to record their statements, according to the Hindustan Times.

Rakendra Kathait, a police officer at the police station, said: â€œBoth have received the notices. “

The officer added that the police could not give notice to Maharaj because he was not present at his home in Haridwar. â€œWe are trying to locate him,â€ Kathait said.

During the event in Haridwar, Annapurna Sadhvi the Hindutva leaders repeated calling for genocide: “If you want to end their population, then we are ready to kill them”, we can hear him say in a video. “Even if 100 of us are willing to kill 20 lakh, then we will be victorious.”

Later, she even told NDTV that the Constitution was wrong. “Indians should pray to Nathuram Godse,” she added.

The other accused, Dharamdas Maharaj, called for the assassination of former Prime Minister Manmohan Singh “by following in the footsteps of Nathuram Godse [Gandhiâ€™s assassin]â€. He made the comments in reference to Singh’s 2006 statement to Parliament, saying minorities must have the first claim on the country’s resources.

No arrests have been made in this case so far, although opposition leaders, Supreme Court lawyers, Muslim organizations and prominent citizens have questioned the government’s inaction.

“When the polls are around …”: pilot on hate speech to “Dharam Sansad”

Fear of Covid 19 Omicron: Government to Speak Up, Touring DJ Targeted by “Hate and Abuse”