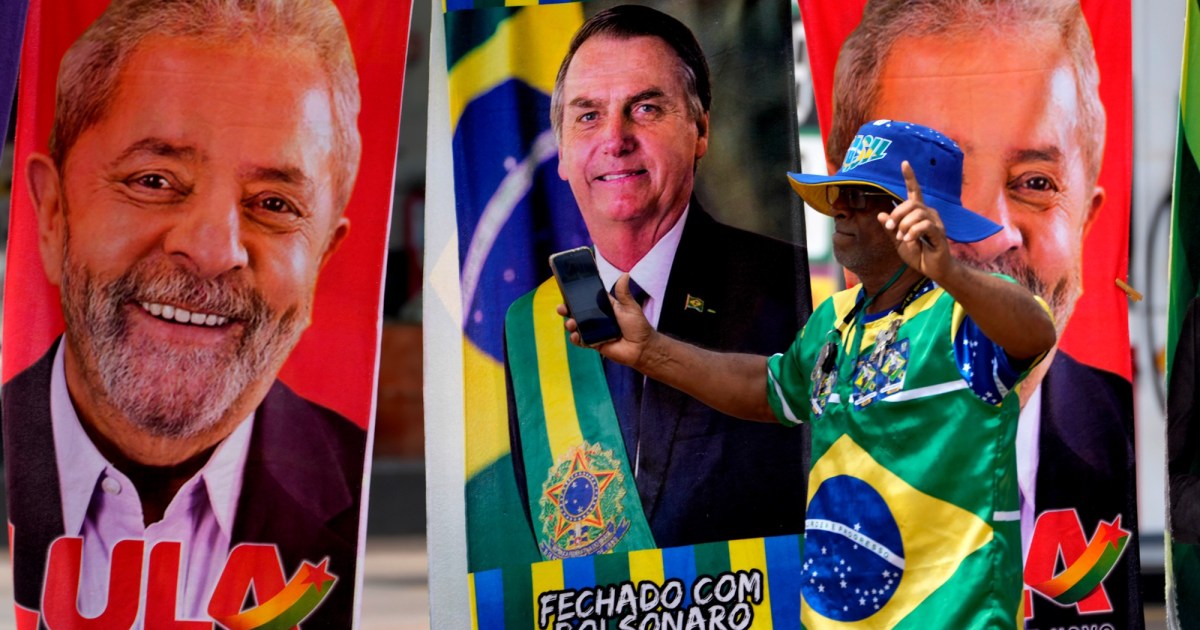 Fight against misinformation: Register for free Mother Jones Daily newsletter and follow the news that matters.

Every other day, my WhatsApp is overflowing with messages from friends in Brazil and abroad expressing equal amounts of excitement and apprehension ahead of Brazil’s presidential elections on Sunday. On Wednesday, my best friend who lives in the country’s capital, Brasília, texted to say she was afraid to wear red clothes to vote this weekend because red is the color associated with the Workers’ Party. of former President Luiz Inácio Lula da Silva. Lula, the current favorite, has a real, albeit slim, chance of beating far-right incumbent Jair Bolsonaro in the first round by securing more than 50% of the valid votes. “The mood is terrible,” she wrote, later adding that in the past 48 hours, four cases of political violence had been recorded across the country. “It’s very sinister this fear of speaking out.”

My friend’s concerns are justified. The upcoming presidential elections in my home country are the most charged and hateful in recent memory. In July, one of the president’s supporters shot and killed a local Workers’ Party treasurer at his Lula-themed birthday party. Even before the campaign officially kicked off in August, pro-Lula protesters were bombarded with feces and urine. On September 7, the day of the commemoration of 200 years of independence of Brazil, in the midst of political discussion, a supporter of Bolsonaro kills a supporter of Lula, stabs him 70 times and attacks him with an ax. This month, a researcher from Datafolha, one of the main polling institutes in Brazil, was assaulted. At a bar in Rio de Janeiro, a 19-year-old woman was hit in the head after a Bolsonaro fan threatened to hit her sister as she criticized the president. Nearly 70% of Brazilians polled in a September poll said they fear being victims of politically motivated violence.

“Online and offline hate speech, harassment and serious political violence have made many Brazilians afraid to express political opinions and exercise their political rights,” said Juanita Goebertus, director for the Americas. to Human Rights Watch, in a statement. “Electoral and judicial authorities, police forces and other authorities must do everything possible to protect freedom of expression and assembly and ensure that Brazilians can vote safely.” United Nations experts also called for peaceful elections and condemned “the continued attacks on democratic institutions, the judiciary and the electoral system in Brazil”.

“Online and offline hate speech, harassment and serious political violence have made many Brazilians afraid to express political opinions and exercise their political rights.”

This is not the first time that political violence has been part of a Brazilian election. In 2018, Marielle Franco, a black, gay, feminist Rio de Janeiro board member and human rights defender, was killed along with her driver after leaving a black women’s empowerment event. She has become an international icon as a symbol of resistance and activism, but her murder remains unsolved. That same year, while on the campaign trail, Bolsonaro was stabbed by a mental patient. Since then, the country’s Superior Electoral Court, which oversees elections, has recorded a spike in violence against candidates. When my American colleagues recently asked me what I thought the outcome of this election would be, I said bluntly that I believed Lula would win, if only he didn’t get assassinated first. (The lead candidate’s security apparatus has been beefed up and he wears a bulletproof vest at public events.)

Bolsonaro himself has often incited hostility, even outright violence. A former Army captain and congressman for 27 years, he was famous for his misogynistic and homophobic views. As president, he stands out for his disastrous handling of the Covid-19 pandemic and his contempt for the Amazon and climate change. He called for the Workers’ Party to be swept into the “dustbin of history” and spoke of shooting the “petralhada”, a pejorative way of referring to those who vote for the left-wing party. This authoritarian president, who received the full endorsement of former President Donald Trump, relaxed gun laws, which led to a triple-digit increase in the registration of gun owners and told his followers to “prepare” for what is likely to be a negative outcome. for the president. Ahead of Independence Day rallies in September, Bolsonaro urged his supporters to “take to the streets one last time”.

In anticipation of his defeat in the polls, which show Lula leading by 14 points, Bolsonaro borrowed from Trump’s playbook to repeatedly cast doubt on the integrity and security of the election. He attacked the judges of Brazil’s Superior Electoral Court and Supreme Court and spread baseless allegations of voter fraud while insisting that highly secure electronic voting machines be replaced with paper ballots. Days before Brazilians head to the polls, Bolsonaro’s party even released a document outlining a plan to challenge the election results, including unsubstantiated allegations that government employees and contractors have the ” absolute power” to manipulate the electoral system. In response, the Superior Electoral Tribunal issued a statement calling the allegations false lies “without any basis in reality”.

“The world is watching this election and it is imperative that the voice of the Brazilian people be heard and regardless of the results respected by people of all political ideologies.”

The president’s anti-democratic tendencies, his flirtation with Brazil’s past of military dictatorship and the support he enjoys from the armed forces and military police have raised concerns domestically and abroad about a possible coup. State in the event of a defeat – or, at the very least, a post – election scenario similar to what happened in the United States following the 2020 presidential election and culminating in the January 6 insurgency. On Wednesday, the US Senate unanimously passed a resolution urging the US government to “immediately recognize the results of the elections in Brazil, if those elections are deemed free and fair by observers and international organizations.” In a video message shared by Lula’s campaign, Sen. Bernie Sanders (I-Vermont), who introduced the resolution, said: “The world is watching this election and it is imperative that the voice of the Brazilian people be heard and regardless of the results respected by people of all political ideologies”.

In August, I spoke with Guilherme Casarões, political scientist and professor at the Getulio Vargas Foundation in São Paulo, about Bolsonaro’s radicalization and the possibility of “social chaos” before and after the elections:

Bolsonaro made it very clear that he has no interest in accepting the outcome of the election if it is not his own victory. There’s a Trump-like element to his reluctance to accept an unfavorable outcome in addition to a story of fraud. In the case of the United States, I think it has not gotten worse because there is still some institutional resistance. The military did not embark on Trump’s putschist adventure, some Republican deputies did not accept it either or wanted to distance themselves. Now January 6 is under investigation. You have a series of measures that show a certain democratic resistance that I don’t think we would have in Brazil, especially if civil society is unable to take a stand. Not because there are no democrats in Brazil, but because political institutions have already been dismantled or co-opted.

In his desperation and desire to retain power that could echo Trump, Bolsonaro, who has said his only three options are jail, death or victory, maintains that he will accept the election result, but always with the caveat that the elections must be “clean”. Other times, again using similar tactics to the former US president, he rallies his base saying it’s impossible for him not to win in the first round and that if he doesn’t get 60 % of the votes, something “abnormal” will have taken place. Die-hard Bolsonaro supporters buy into this extremist, Holocaust-denying rhetoric, and then escalate it. In addition to widespread misinformation around voter fraud, researchers from ActiveFence, a technology company using artificial intelligence to monitor online harm, detected online speech promoting military intervention, including calls to hijack Article 142 of the Brazilian Constitution, which states that the armed forces are, under presidential authority, to guarantee ‘law and order’ – and suggesting that the army should play a more active role in the electoral process.

The stakes of the Brazilian presidential elections cannot be overstated. In some ways, like the choices facing American voters ahead of the November midterm elections in the United States, Brazilians will weigh whether or not to stand up for democratic institutions and values, truth and freedom of speech. As I write this article, a press release email has arrived in my inbox promoting an op-ed with the title: “Can democracy survive the upcoming elections in Brazil?” I find myself asking the same question.

“We have decided not to allow hate in his comments”