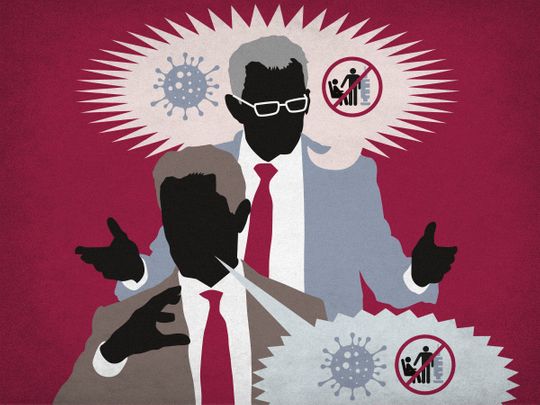 The “hate speech” of COVID-19 must be fought. it kills people

Robert Schmitt is a popular host on Newsmax TV, an influential news channel in conservative circles in the United States. His show last week was devoted to COVID-19 vaccines, in light of the current spike in cases of infection in the United States and around the world.

Schmitt is known with many of his network colleagues for their rant propagating conspiracy theories, which peaked in last year’s presidential election when the channel embraced and fueled Donald Trump’s savage accusations of massive fraud. to polls.

But last week Schmitt outdid himself. He displayed an absolute level of insanity, claiming on his show that he didn’t mind that part of humanity was “wiped out” by the coronavirus pandemic. It would be part of natural selection, Ã  la Darwin, he argued.

He started off by stating that he was not a doctor – and we thank God for that – then he continued, â€œI’ve always thought about vaccines, and I feel like a vaccination is one way. strangeâ€¦ just generally unnatural. If there is a disease there; maybe there’s just an ebb and flow in life where something is supposed to wipe out a number of people, and that’s exactly the kind of how evolution takes place. [And] vaccines sort of get in the way of that.

Her comments on live television sparked great controversy, mainly against her savage rant that forced the channel to issue a statement that she “strongly supports President Biden’s efforts to widely distribute the COVID vaccine.”

In recent weeks, COVID-19 cases and deaths have risen sharply around the world in what the World Health Organization (WHO) has called a “disheartening setback” to our collective hopes of a curtailment: a free summer. According to WHO figures, deaths from COVID increased in the second week of July after nine consecutive weeks of decline.

The organization has reported more than 55,000 deaths worldwide, a 3% increase from the previous week. During the same period, cases of infection rose 10% to nearly 3 million – the highest numbers recorded in Brazil, India, Indonesia and Britain.

The setback is due to decisions by many countries to relax restrictions such as wearing face masks and allowing large gatherings like during the Euro Cup football tournament.

And of course, all of this is magnified by the rapid spread of the more contagious and deadly Delta variant, which the WHO says has now been “identified in 111 countries and is expected to become globally dominant in the coming months.”

According to the WHO, the main reason for the recent spike is “the low vaccination rate”. Not enough people have taken the jab.

Despite these painful facts, we are seeing more and more fanatics like Schmitt who continue to use social media to spread these strange anti-vaccine theories.

Countries have yet to impose an increasingly necessary ban on this propaganda, which is in fact a type of hate speech. On the contrary, this new hate speech, which literally kills people, is endorsed and propagated by mainstream politicians and public figures!

In Australia, popular conservative politician Senator Malcolm Roberts has waged a months-long war on his official vaccine Facebook and Twitter pages – from highlighting false vaccine side effects to calling for popular protests against compulsory vaccination.

His campaign and others led to several large protests against the immunization program a few months ago, with protesters carrying signs reading “my body, my choice” and “we don’t need vaccinations, we don’t. ‘we don’t need crowd control.

In recent days, similar protests, fueled by anti-vaccine propaganda and misinformation on social media, have taken place in Greece and France.

In parts of the Arab world, similar propaganda on social media, some of which has found its way to national televisions, can be seen in Lebanon, Egypt, Jordan, among others.

In Kuwait earlier this month, hundreds of people protested in the capital against the vaccine, speaker after speaker repeating the same wild lies they must have read on social media.

“They are killing people,” US President Joe Biden aptly said on Friday when a reporter asked him about the role of social media platforms such as Facebook in spreading vaccine propaganda and misinformation and the coronavirus. I think he was referring to lies and conspiracy theories.

But these are facilitated by greedy tech giants, who have raked in billions in advertising revenue since the start of the coronavirus epidemic.

The White House has said it is pressuring these social media companies to tackle the problem of disinformation. Obviously, the two sides are not doing enough. I see more and more anti-vaccine videos every day.

We are in the midst of an existential battle against a deadly enemy that knows no borders. Discouraging people not to prepare for the inevitable infection is in many ways a direct call for mass murder.

With more than 4 million dead, the anti-vaccine campaigns led by many influential figures on Facebook, Twitter and YouTube are nothing but hate speech. And should be treated as such by countries around the world.

The hate speech law, a threat to democracy