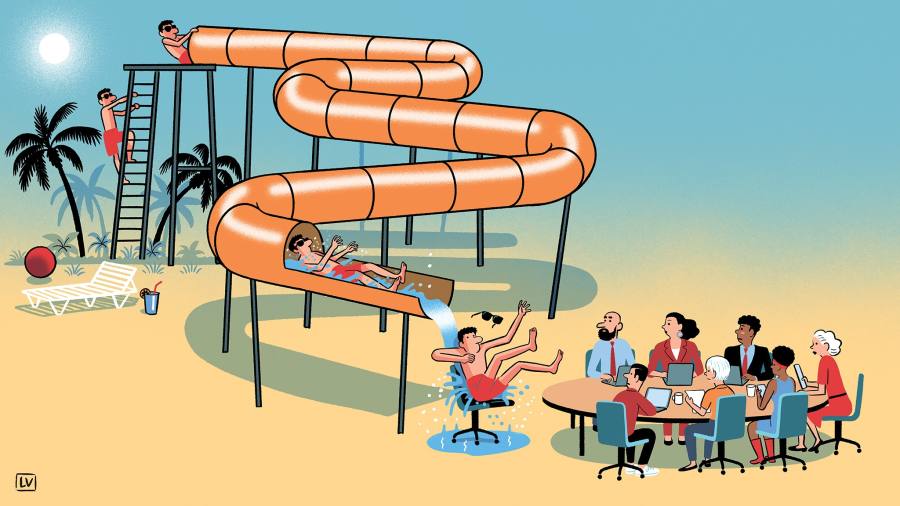 The agonizing annual hell of the office outside

It’s surely one of the great flaws in global songwriting that none of the world’s Tin Pan Alleys have ever delivered a classic song about the “September Strategy Session”.

This screaming omission is all the more remarkable given that songwriters have had so much success with tunes on September. You can discover “September in the rain”. You can, in the words of Earth, Wind & Fire, ba-dee-ya and say you remember, which seems like an overall positive thing to do. Or you can mope as the days get shorter in the “September Song.”

I definitely experienced September in the rain. I’m not sure I have ba-di-ya-d already, but it’s possible I did without realizing it. But what I’ve definitely been doing this month (in my September back-to-work spiky haircut, also oddly omitted from canon) is attending office days and their brother less glamour, the present day.

Given the centrality of this macabre event to our Septembers, it seems odd that it hasn’t yet been marked into song. Admittedly, even WS Gilbert struggled to find a word that rhymes with strategy, a challenge that led to the weakest verse in his “. . . Modern Major-General”.

Awayday offers payday and climax, but has always proven too difficult for great lyricists, although Leonard Cohen came close with his classic lines: “I heard there was a strong joint , which let you love PowerPoint, but you don’t really like going for slides, right? »

But I digress. This week marks the time when, for thousands of unfortunates, the return to the office coincides with a fall strategy session, complete with a working lunch and a “bonding” discussion about work over dinner. Sometimes it’s announced well in advance, sometimes it’s preceded by August emails from the boss that always start with “Don’t let me interrupt your vacation but…. . . » before sketching a boring idea that came to them « during a mid-morning swim in the Adriatic ».

The nature of the day of absence varies according to status. Senior executives may get a nice hotel with a golf course, more junior teams may find their getaway is simply a meeting room on a different floor.

Too often the agenda is last minute and you’re suddenly asked to pull together “just three or four” good ideas in about 36 hours, just as you find out the data team ran away during late breaks to avoid the rush of working days. thrown at them by those who need help fleshing out their slideshow. This is a problem because the rules of absence clearly dictate that weak ideas can be salvaged by jazzy presentations.

The challenge is to come up with ideas that seem ambitious enough to show that you are an agent of change but small enough not to ruin your year.

If you’re lucky, the session is just for the boss to give instructions. But otherwise, the challenge is to come up with ideas that seem ambitious enough to show you’re an agent of change but small enough not to ruin your year. But it’s a minefield. Be too modest and someone will find a better way to do it. Every meeting has a person, often with no direct responsibility themselves, who likes to toss out sweeping thoughts like, “Why don’t we just merge these teams (or split them, at the same meeting two years later )?”

Too often, the challenge is simply to come out with your team or role intact and be ready for the co-worker who suddenly wonders why your team is so great. Every event has one person who talks too much and another who only intervenes once but always with devastating effect.

And yet, if that prospect is bleak for ordinary office workers, imagine what it feels like in the civil service as they await the arrival of a new prime minister and a string of new ministers, all trained in defiance of administration and expertise, and passionate about carrying out the ill-considered impromptu plans dreamed up by the candidates to secure a Telegraph front page. Surely even the worst day out of the office is better than the impending Whitehall bonding sessions with their subtext: ‘We hate you, now help us out of this crisis’.

In fact, I just remembered “Wake Me Up When September Ends” by Green Day. So maybe there’s a song about the whole back to work thing after all.