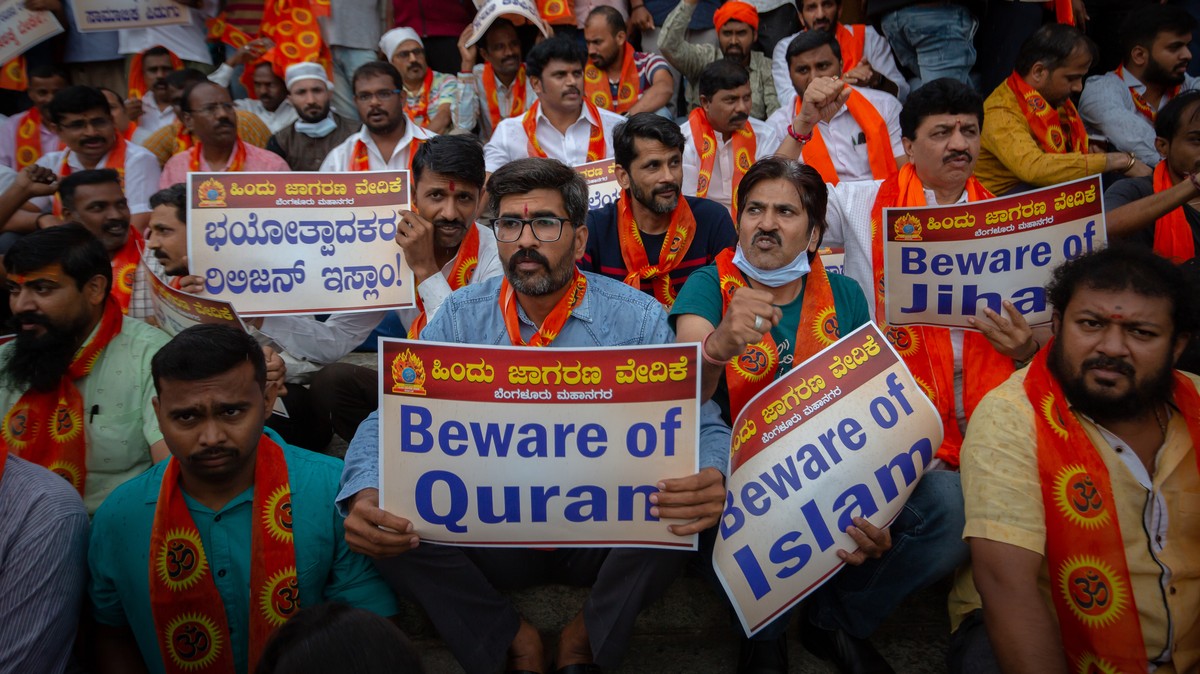 Protesters affiliated with various Hindu organizations hold placards and shout slogans during a demonstration against the killing of a Hindu in India. Photo: Abhishek Chinnappa/Getty Images

Religious tensions in the world’s largest democracy are rising, as the brutal killings of two men in India who expressed support for the Prophet Muhammad’s insulting comments have been met with an Islamophobic backlash from Hindu nationalists.

Over the past week, police have made arrests in two Indian cities in connection with the killings of a Hindu tailor who was axed to death on June 29 and a Hindu chemist who was stabbed in the neck on June 21.

The assailants charged in both cases are Muslims, and police have confirmed that both victims were targeted for supporting recent anti-Prophet comments made by a former member of India’s ruling Hindu nationalist party BJP.

Nupur Sharma was suspended by the BJP after she insulted the Prophet and the Quran during a current affairs debate on May 29. His comments sparked a chorus of condemnation from Muslim countries, while protests erupted across India. Sharma filed a complaint with the police for receiving death and rape threats in the weeks after his comments, while Hindus who expressed their support for the BJP politician on social media said they faced to death threats.

On July 1, a Supreme Court judge blamed the violence on Sharma’s “loose tongue”, saying she had “set the country on fire”.

“This lady is solely responsible for what is happening in the country,” the court said during Friday’s procedural hearings into several criminal complaints against Sharma. “She should apologize to the whole nation.”

The murders are being investigated by India’s top counter-terrorism task force, the National Investigation Agency. On Monday, the BJP held a condolence meeting for the slain chemist, Umesh Kohle, in the town of Amravati. At least 2,500 people showed up with signs demanding justice.

While the brutality of the killings has shaken the country, there is now an escalation of Islamophobia in several cities where Hindu nationalists are demanding revenge. Thousands of people took to the streets over the weekend in Udaipur, where the tailor was murdered, as well as in Jaipur and Chandigarh, demanding the death penalty for the accused.

In many areas, the protests have been led by Hindu nationalist groups such as the Vishwa Hindu Parishad (VHP), a BJP-affiliated group known for its attacks and Islamophobic rhetoric. In Gurugram, a satellite town of India’s capital New Delhi, police cracked down on those brandishing inflammatory slogans at a VHP event intended to stir up new tensions. From raised slogans in the gathering up close 100 people on June 29 were: “[Slur for Muslims] have two places: Pakistan and the cemetery” and “When the Muslims are killed, they will take the name [of our Hindu deity] RAM.”

Surendra Jain, co-secretary general of the VHP, distanced herself from the hateful slogans and speech seen at the rally. “The court system will decide whether or not it was hate speech,” Jain told VICE World News. “We don’t approve of them. They were committed by strangers and we are ready to work with the police to catch them.

On July 3, the VHP and other groups held another meeting with at least 200 people present demanding an economic boycott of Muslims. India has a record of Hindu-led boycotts against Muslim businesses, with similar efforts taking place in April in states that have seen communal tensions. A news outlet reported that some speakers at the VHP meeting also urged people to keep guns in their pockets, instead of cellphones, for their safety. They also demanded that the authorities get rid of “illegal immigrants”, a mockery often directed at Muslims living in India.

Jain said the VHP was not only mobilizing to seek justice for the murders of Hindu men, but also highlighting a “global problem”.

“Islamic extremism is on the rise,” he said. “These [killings] are not isolated incidents. Do [these Islamic extremists] do you want to turn India into Afghanistan? »

“Hindus are not violent, but even the laws allow us to take all measures of self-defense.”

The escalation of tensions points to the broader and growing trend of anti-Muslim hate speech and Islamophobia in India. The murder of Udaipur tailor Kanhaiya Lal – in which the assailants wielded a meat cleaver and made a viral video saying they would come next for Indian Prime Minister Narendra Modi – only stoked existing hatred, despite the fact that Indian Muslim organizations strongly condemned the crime.

“Their religion has terror genes. They will never be civilized citizens,” it read. awhile another says“Time to be together and [pick up] arms.” Incendiary social media posts have been known to translate into real-life violence in India, including lynchings.

Mahmood Madani, who heads the Jamiat Ulama-e-Hind (JUH) group, told VICE World News that the ongoing hate speeches and rallies are part of the long trend of Hindu nationalism in India. JUH was among the first Muslim organizations to condemn the killings, calling them “not only anti-Islamic, but also anti-Islamic”.

“This type of Islamophobia is not new and we have faced violence and hatred for decades. We have been attacked and persecuted,” Madani said. “But in this moment, these killings have provided an excuse to target and persecute us even more.”

The hashtag “Hindu Lives Matter”, in support of Sharma and the deceased men who supported her, is also gaining traction online. The hashtag – co-opted by the Black Lives Matter movement in the US – and accusations of ‘Hinduphobia’ are often used by members of dominant castes to push back against calls for equality from minorities like Muslims and Dalits, these last considered “untouchable”. in India.

Twitter users are showing their support for the men who have been killed for supporting anti-prophet comments, but also hatred against Muslims.

Delhi-based political researcher Asim Ali told VICE World News that the idea of ​​victimhood is central to Hindu nationalist rhetoric. Among the many conspiracy theories that push for this victimization is one that believes that Muslim rule over Hindus is prepared through forced conversions.

“For Hindu nationalism, Hindu society is still under threat, even at the height of this BJP mainstream era,” Ali said.

Hindus are India’s largest religious group, making up almost 80% of the population. Although India’s 200 million Muslims are a minority group, accounting for 11% of India’s total population of 1.4 billion, the country has the third largest Muslim population in the world.

“The ‘sword/dagger wielding fanatical Muslim’ is an old trope in Hindu nationalist imagery, and so the execution in Udaipur represented an almost perfect validation of the fears harbored by Muslims,” ​​he said. he adds. “It makes the perfect messaging medium for Hindu nationalists.”

VHP’s Jain said it was a “collective responsibility to ensure there was no violence”, but added that Muslims were right to worry about the potential for backlash.

“Muslims rightly fear that Hindus will retaliate,” he said. “They should be.”

“This communal temperature level has become the new normal,” Ali said. “But communal tensions are now reaching a fever pitch, and the possibility of an eruption of anti-Muslim violence on a substantial scale cannot be ruled out.”