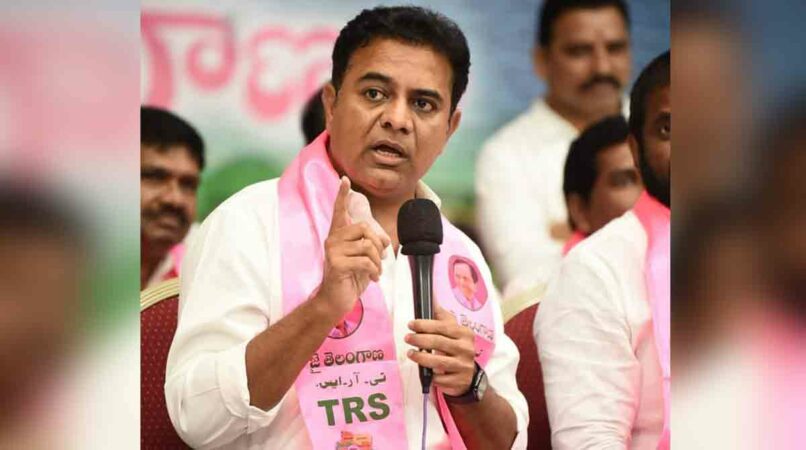 Hyderabad: Municipal Administration Minister KT Rama Rao challenged the BJP leaders to end the hate propaganda policy and compete with the TRS in terms of development. He said that gossip, histrions or obstruction of development was not politics and would do the people of the state no good.

Addressing the gathering after laying the foundation stone for various development works at Badangpet Municipal Corporation on Saturday, Rama Rao recalled that the Reserve Bank of India declared Telangana as the country’s fourth largest economic contributor among states. “But unfortunately, rather than supporting and funding such a vibrant state, the BJP government at the Center is discriminating against us,” he said.

Hyderabad was battered by heavy rains in October 2020 with several settlements inundated. Although the state government urged Prime Minister Narendra Modi to provide flood relief to restore normalcy to the battered city, the minister said there was no response even after 16 at 17 months. However, he pointed out that the Prime Minister rushed to Gujarat in a special helicopter when floods hit the state and immediately authorized flood relief of Rs 1,000 crore.

Rama Rao said that over the past seven years, the Narendra Modi government has sanctioned up to 7 IITs, 7 IIMs, 2 IISERs and 157 medical colleges across the country, but none of them including Navodaya Vidyalayas, was granted to Telangana. “Politics and power are given by people. They are not permanent and people watch what those in power do for them,” he said.

The minister asked the BJP leaders to explain what they have done for the people of Telangana. He said the TRS government had laid foundation stones for projects worth Rs 371 crore in a single day in Badangpet Municipality and dared BJP leaders to explain the amount of funds granted by the central government to Badangpet Municipality for its development.

“We are spending Rs 371 crore on Badangpet Municipal Corporation, I challenge you to sanction a package of Rs 1,000 crore for Maheshwaram Assembly constituency. We give Telangana Rs 2,000 pension but BJP run Gujarat still pays Rs 500 pension. If you are able, get additional Rs 2,000 pension for Telangana,” he challenged . He said no one can stop the development of Telangana State with its religious, divisive and hateful policy.

You can now get handpicked stories from Telangana today to Telegram everyday. Click the link to subscribe.