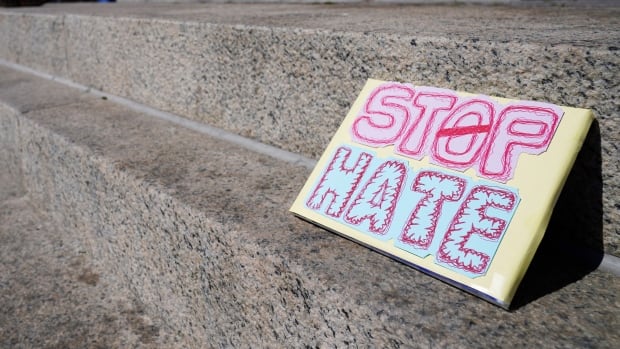 Reported hate crimes in Nova Scotia saw a major spike in 2020, primarily due to race-related incidents, showing that many people of color reported being a long-standing reality in the province.

In 2020, 55 hate crimes were reported in the province, up from 32 in each of the previous two years. The vast majority – 41 – were motivated by race or ethnicity. The rest were motivated by religion, sexual orientation or other reasons.

“My reaction is kind of twofold, you know – worried on one side, but maybe less surprised on the other,” said Timothy Bryan, assistant professor of sociology at the University of Toronto’s Mississauga campus, which examines hate crimes, police responses and racism as part of its work.

A hate crime is defined as “a criminal offense against a person or property motivated by hatred, based on race, national or ethnic origin, language, color, religion, sex, age, mental or physical disability, sexual orientation, or gender identity or expression. , or any other similar factor,” according to the report.

There are also four hate propaganda and hate crimes offenses in the Criminal Code, and judges can impose harsher sentences for criminal offenses, such as assault, motivated by bias, bias or hate.

Of the 41 hate crimes involving race in Nova Scotia, Statistics Canada provided more specific details in an email to CBC.

Most were against black people (13), while the second highest category of nine incidents involved “other” race or ethnicity. This group included crimes targeting more than one race or ethnic group, or someone who was not of Black, White, Asian or Indigenous descent.

Throughout Nova Scotia’s history, there have been “deep-seated issues and concerns” about various forms of racism, particularly anti-Black and anti-Indigenous racism, said Bryan, who has lived in Halifax and taught at Dalhousie University.

The numbers provide a “concrete reality” that can’t be denied, Bryan said, which is valuable for marginalized groups who haven’t always been believed when speaking from first-hand experiences.

With data like this, Bryan said the conversation can move away from whether racial hate crimes exist, to looking at how the province can respond to them, better support victims, and create societies that are ultimately free. of hate.

“Unfortunately, I think the reality for many is that when these types of issues are out of sight, they’re largely out of mind,” Bryan said.

“These numbers…give us an opportunity, I think, to have a conversation that some people might like to avoid.”

In Halifax alone, 16 hate crimes were reported in 2020 compared to eight the previous year. Nine were motivated by race, six by religion and one by other reasons.

The Statistics Canada report noted that 2020 has been a time of social movements in Canada and around the world in response to injustice and police misconduct involving Black people and other groups.

There were 2,669 reported incidents nationwide, up 37% from 2019, the highest number recorded since comparable data became available in 2009.

While Canada reported 663 hate-motivated incidents against black people in 2020, the highest number ever, the report notes that black people have historically remained among the most targeted groups.

Blacks accounted for 26% of all hate crimes, more than double the next highest group, the Jewish population.

Nova Scotia followed a similar trend: after Black and “other” ethnic groups, Jews were the most targeted of any religion in seven incidents in 2020. No other hate crimes against religious groups were reported. reported to the police that year.

Like any form of crime statistics, Bryan said it’s unclear if the higher numbers reflect more of these incidents or just shine a light on the activity that has been there all along.

“But it’s remarkable, I think, that we’re seeing a sort of continuing pattern, even in Nova Scotia, of some forms of discrimination, of violence directed against communities that goes back decades,” he said.

The year 2020 also brought the COVID-19 pandemic and more open hostility to those of East and Southeast Asian descent. The data showed a major national jump of 301%, to 269 incidents from 67 the previous year.

Christine Qin Yang, who is originally from China and has lived in Halifax for 10 years, said she was “not surprised” to see the numbers since she herself has been the subject of anti-Asian comments.

She said international students have also told her about the verbal harassment they’ve experienced in Halifax on the bus, in grocery stores or while walking down the street. But many of these people don’t report the crimes because they don’t want to “cause trouble” and are worried about their immigration status if they go to the police, Qin Yang said.

While non-violent incidents, such as mischief and public disorder, accounted for the majority of all hate crimes nationwide at 57% in 2020, Qin Yang said these types of crimes and of verbal harassment were just as hard-hitting as a physical blow.

These comments can change the way people move around their own city and disrupt their “mental safety”, she said.

At a time when Nova Scotia is struggling to increase immigration and welcome new Canadians to address labor and economic issues, Qin Yang said it was important to become a ” more welcoming community.

It can start at the individual level by asking passers-by to speak out against racial abuse when they see it, especially for immigrants or international students who might not speak English well, she said.

“They may be in shock. It takes them a while to respond to the abuser, so it’s important for people to speak up and support them,” Qin Yang said.

Individuals should also speak up about racist jokes or comments they hear from friends and family, Bryan said, which can all too easily escalate into other hateful behavior.

Bryan said the numbers show hate crimes are “more common in our society than we would like to believe” and require a more substantial response from all levels, but especially government and police.

Governments must invest in programs that not only keep marginalized people safe, Bryan said, but also provide opportunities for diverse communities to meet, connect and dispel the myths that often lie behind of these incidents.

He said police need to better understand how officers respond to these crimes and encourage reporting. Even though there are spikes in numbers from time to time, Bryan said the “vast majority” of hate crimes go unreported because people fear they won’t be taken seriously, that nothing can happen. be done or they are further suspected by the police themselves. .

While statistics provide the opportunity to have those important conversations, Bryan said at the time that it’s critical not to lose sight of the real people behind those numbers.

“These numbers are families,” he said.

“Whether it’s one or 100, whether it’s a 50% increase or a 2% decrease, you know, if there are people who are made to live in…a society or a community, where they feel where they hesitate to live as they are in the world, well that’s one person too many.”

const. Halifax Regional Police spokesman John MacLeod said in an email that they take hate-motivated incidents towards a specific group ‘very seriously’ and have started additional training for officers. to create a new hate crimes unit.

He added that if anyone finds themselves exposed to offensive, threatening or intimidating behavior, they should report it to the police for investigation.

“Even if the investigation does not reveal foul play in this specific incident, it is important to document it,” MacLeod said.

A spokesperson for the province’s Office of Equity and Anti-Racism Initiatives said in an email that the 2020 data reflects what they heard from members of marginalized and racialized communities.

An all-party committee has been working on legislation that will be introduced “very soon” to address racism, hate and inequality in Nova Scotia, spokesperson Chad Lucas wrote.