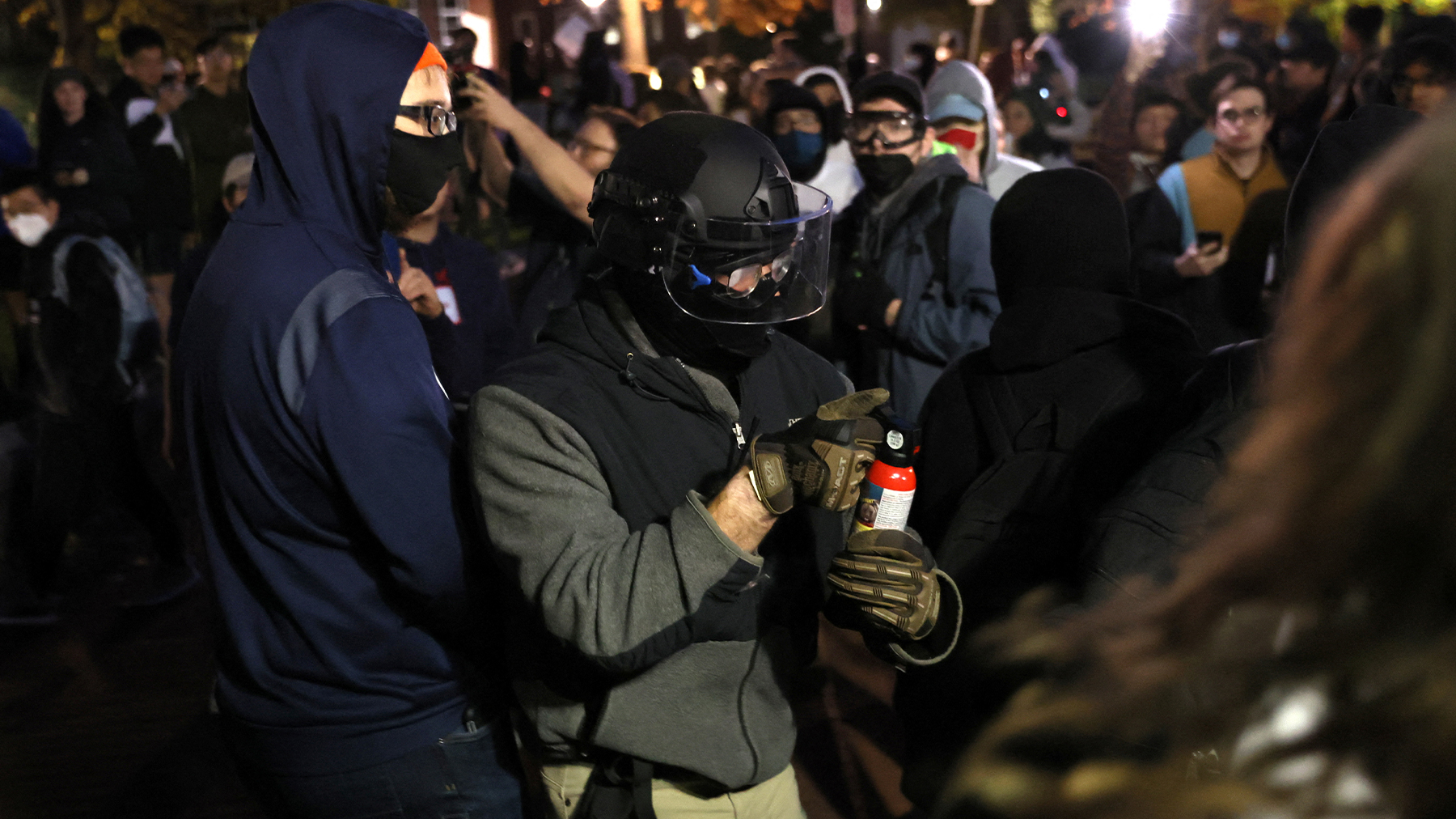 Amid rising tensions Monday night, Penn State canceled the event, which featured Gavin McInnes, founder of hate group The proud boys, and right-wing YouTube artist Alex Stein. Until then, the university had ignored protesters and experts who had warned the rally would draw violence to campus.

An unidentified person holds up a bear mace box on Monday before using it on protesters ahead of a planned event featuring Proud Boys founder Gavin McInnes at Penn State University in State College, Pennsylvania. The event was canceled by Penn State officials “due to the threat of escalating violence.” (Photo via Reuters/Leah Millis)

The group that hosted the event, meanwhile – which has links to a wide network of far-right activists and groups – is announcing other events at other universities.

A rally attendee (whose name is withheld for personal security reasons) told Hatewatch that the mood among the approximately 200 protesters on campus had been defiant but upbeat until the event was escalated in two ways by campus police.

At one point, the protester said, a number of mounted police moved to a small area on one side of the site, close to a group of protesters.

“It made it worse. People started shouting, ‘Fuck you! to the cops,’ he told Hatewatch in a phone conversation, “and some of them started saying : “Fuck you!” back.”

Video of the event posted on social media appears to confirm this account of police entering into a contentious interaction with protesters.

Shortly after, he said, police allowed Alex Stein – one of the scheduled speakers – to mingle with the crowd some distance from law enforcement, taunting them as he often does. to generate outrageous content for his YouTube channel.

“Obviously, [Stein] was trying to get into people’s faces to get content,” the protester said.

Daryle Lamont Jenkins, who reported on the event for an independent anti-fascist news site Idavoxconfirmed that Stein had attempted to “troll” the crowd.

He told Hatewatch in a phone conversation that up until then the focus had been on “keeping a watch”, but “the mood changed when Alex Stein started taunting people”.

“He shouldn’t have been allowed to do that,” Jenkins added.

“Police weren’t close enough to intervene if someone punched him,” Jenkins said.

“To the protesters’ credit, hardly anyone took the bait,” Jenkins said. “Stein was visibly frustrated that people weren’t more aggressive in their responses to him.

Soon after, according to Jenkins, a number of Proud Boys emerged from the crowd and began to interact aggressively with the protesters.

Finally, in an incident filmed on several videos posted on social media, a far-right protester – wearing a bulletproof vest and facial protective gear that obscured his identity – threw pepper spray into the crowd without provocation, disabling students and journalists nearby.

Shortly after, Penn State canceled the event and issued a statement that appeared to blame student protesters for the violence, without citing evidence. The statement condemned “polarization” rather than far-right violence.

The statement defended Penn State’s actions while offering an idiosyncratic theory of protest, stating, “We have encouraged peaceful protest, and while protest is an acceptable form of expression, it becomes unacceptable when it interferes with the fundamental exchange of ideas.”

“Such obstruction is a form of censorship, regardless of who initiates it or for what reasons,” the statement added.

Neither this statement nor a follow signed by Penn State President Neeli Bendapudi acknowledged that student protesters had been pepper sprayed by far-right activists, with Bendapudi saying it was “unclear to which people there then resorted to … using pepper spray.”

Hatewatch contacted Penn State’s Office of Strategic Communications for comment on the police actions and the outcome of the event, but there was no immediate response.

Meanwhile, Uncensored America (UA), which hosted the event, continues to advertise future events and promote its chapters at Penn State, the University of Tennessee, Knoxville and the University of Wisconsin-Madison. All of the band’s past and future events feature far-right speakers, sometimes in “debates” with other social media artists who present themselves as liberals or centrists.

Like Hatewatch Previously reportedthe group was founded by Sean Semanko, whose membership in the pro-Trump student group, the Bull Moose Party, connects him to a network of far-right actors that includes the directors of a white nationalist publishing house Antelope Hill.

In September, funding for the event was approved by Penn State’s University Park Allocation Committee (UPAC), which allocates a portion of tuition to registered student organizations for on-campus events.

UPAC records show that the funding included $6,500 total in fees for McInnes and Stein, and more than $1,000 for their airfare, according to UPAC meeting minutes.

Regarding Penn State’s decision to host the event, Jenkins, the reporter, said that besides the threat to public safety, these tuition payments were the main concerns of the protesters.

Regarding the administration’s decision to try to organize the event, Jenkins said, “Free speech is not a suicide pact. You knew this was coming.”