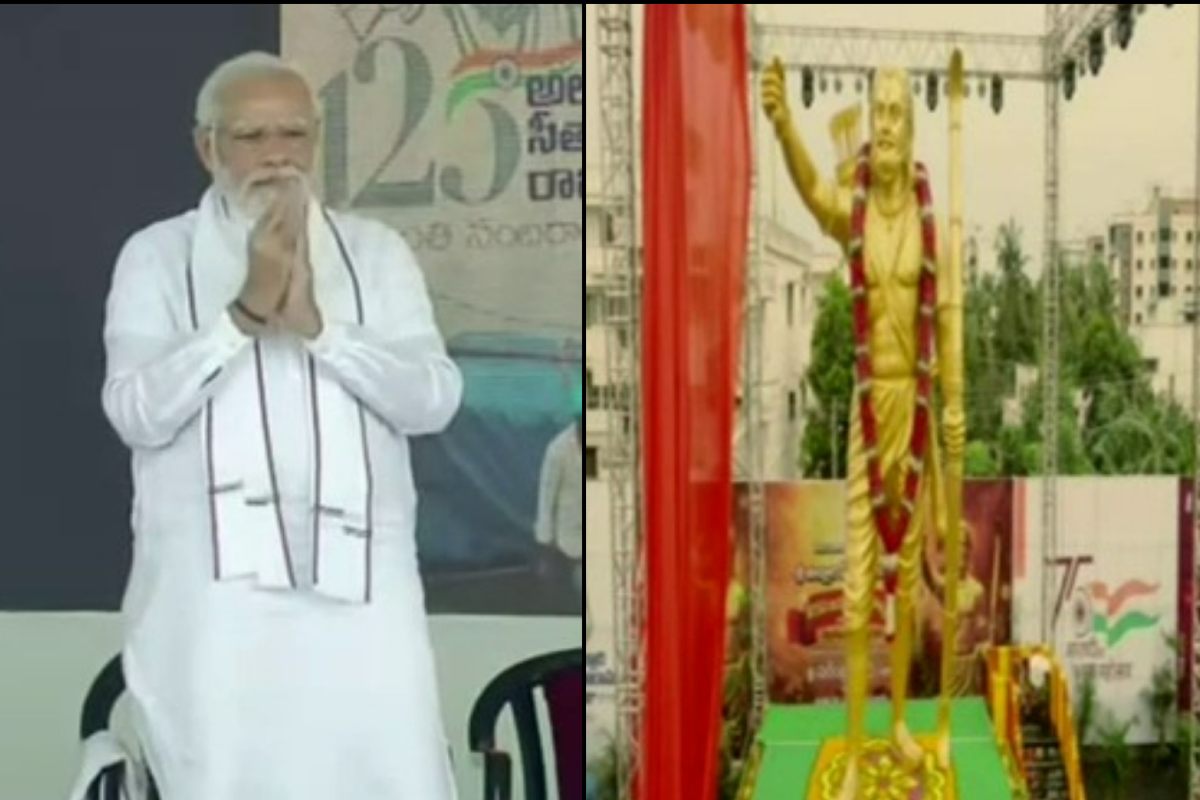 The 15-ton statue was sculpted at a cost of Rs 3 crore and installed by the Kshatriya Seva Samiti in Bhimavaram City Park, as part of ‘Azadi Ka Amrit Mahotsav’ celebrations.

According to some historians, the patriotic discourse prevalent during the freedom struggle had a strong influence on Alluri from childhood. Following the death of his father, his schooling was disrupted and he traveled through India during his adolescence. The socio-economic conditions of the country under British rule, particularly in the tribal areas, moved him deeply. During these travels he met revolutionaries in Chittagong (now Bangladesh). Alluri then decided to build a movement against the British. He organized the local Adivasis in the forest areas along with Visakhapatnam and East Godavari districts into a powerful force to launch a frontal attack.

The famous attack on the Chintapalli police station on August 22, 1922, with more than 300 revolutionaries, was the first of the series, which ended in a shooting. Alluri’s sheer audacity to give the police advance notice of the date and time of the attack left Britons stunned. He enlisted the loot and signed the station log after the attack, making it his trademark.

He carried out similar attacks later on Krishnadevi Peta and Raja Ommangi police stations. Revolutionaries under Alluri’s leadership seized weapons and arsenals in all of these attacks. A large contingent of reserve police from Visakhapatnam, Rajahmundry, Parvatipuram and Koraput was dispatched to these areas led by British officers and, in the ensuing skirmish, two of them, Scot and Heiter, were killed by the revolutionaries on September 24, 1922. , and several others wounded.

Agency commissioner JR Higgins had announced a price of Rs 10,000 on Alluri’s head and Rs 1,000 each on his close lieutenants Gantam Dora and Mallu Dora. The British deployed hundreds of Malabar Special Police troops and Assam Rifles, led by senior officers, to crush the movement. Alluri won the grudging admiration of the British as a formidable guerrilla tactician. Unable to contain the Manyam uprising, the British government appointed TG Rutherford as the new commissioner in April 1924 to suppress the movement.

Rutherford resorted to violence and torture to find out the whereabouts of Alluri and his main supporters. It was a relentless pursuit by the British forces which cost them an overall amount of Rs 40 lakh. Unable to bear the brutal repression against the tribals, Alluri eventually surrendered and was martyred on May 7, 1924.