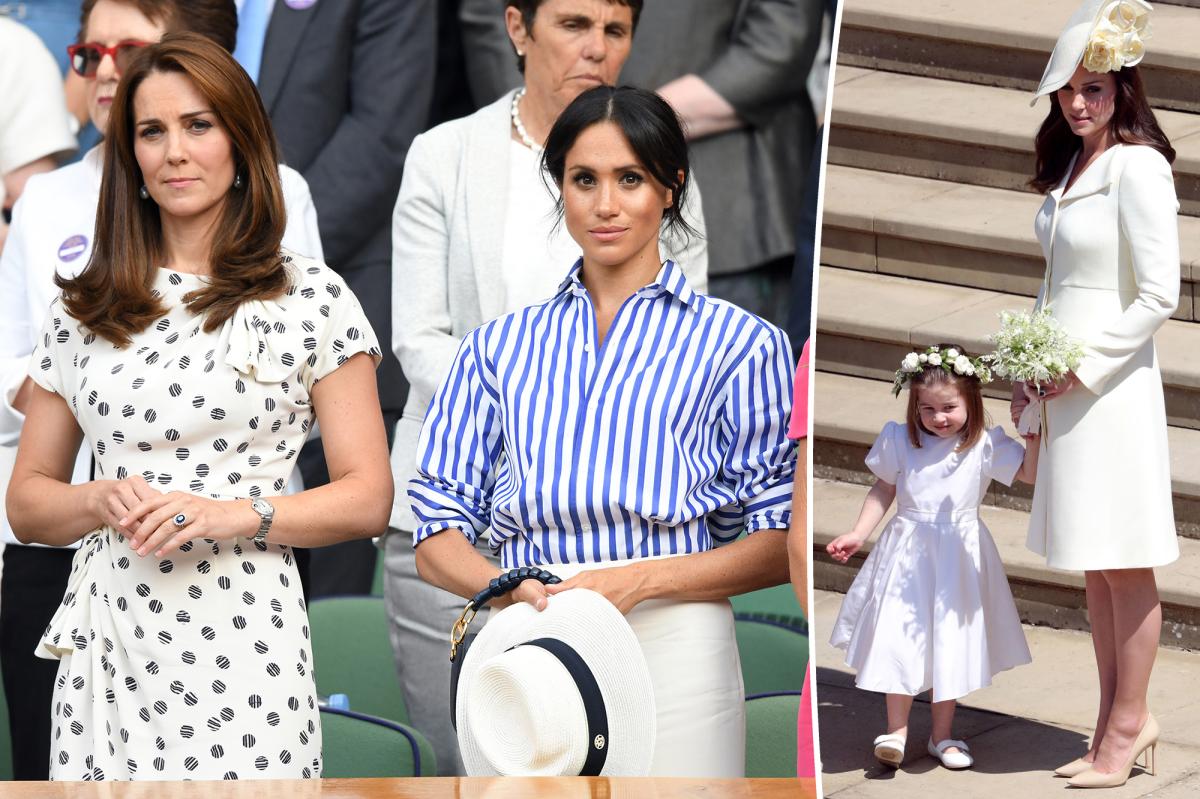 Despite Meghan Markle’s side of the story, it was the Duchess of Sussex who brought Kate Middleton to tears during their bridesmaid feud in 2018 and not the other way around, according to a new royal biography.

Investigative journalist Tom Bower alleges in his book “Revenge” (per the Daily Mail) that Middleton “burst into tears” after Markle compared the Duchess of Cambridge’s daughter, Princess Charlotte, “unfavorably to the daughter of best friend Jessica Mulroney, Isabel, during a dress fitting ahead of the “Suits” alum’s wedding to Prince Harry.

Bower claims that Markle and Middleton, both 40, disagreed over the length of Charlotte’s hemline or the fit of her dress. They also reportedly disagreed over whether Markle’s bridesmaids “should wear pantyhose” to the wedding.

The biographer also claims Mulroney, 42, and Mulroney’s mother “supported” Markle’s “insistence” in the row with Middleton.

Bower’s version of how events unfolded isn’t the first time claims have been made about Markle upsetting Middleton.

Media previously reported that Markle made Middleton cry about what Charlotte, now 7, could wear as a florist – just days before the former actress was due to walk down the aisle.

Tensions were apparently already high between the Cambridges and the Sussexes at the time, and Middleton felt the disagreement was the last straw.

“It was a hot day and apparently there was a row over whether the bridesmaids should wear tights or not,” a friend of Prince William and Middleton told Tatler magazine in 2020 after Harry, 37, , and Markle have stepped down from their royal duties and moved to the United States. “Kate, following protocol, felt they should. Meghan didn’t want them to.

However, in a rare move, Kensington Palace released a statement denying the feud ever happened and saying Tatler’s article contained “a host of inaccuracies and misrepresentations”.

The following year, Markle tackled the accusation head-on, claiming during her explosive interview with Oprah Winfrey that it was actually Middleton who had made her cry.

“The reverse happened,” Markle said, reflecting on the nuptial roadblock during the interview in March 2020. “Everyone in the institution knew that wasn’t true.”

Markle added that she doesn’t know why no one in the royal family has directly denied reports of a rift between her and her sister-in-law.

Markle also confirmed the tiff was about bridesmaid dresses, saying, “It made me cry and it really hurt me.

“There was no confrontation,” she insisted. “I don’t think it’s fair for her to go into detail because she apologized and I forgave her.

“It was a very difficult week of the wedding and she was upset about something, but she owned it, and she apologized, and she brought me flowers and a note, apologizing.”

She called Middleton a “good person” and said she thinks the media “seems to really want a tale of a hero and a villain”.