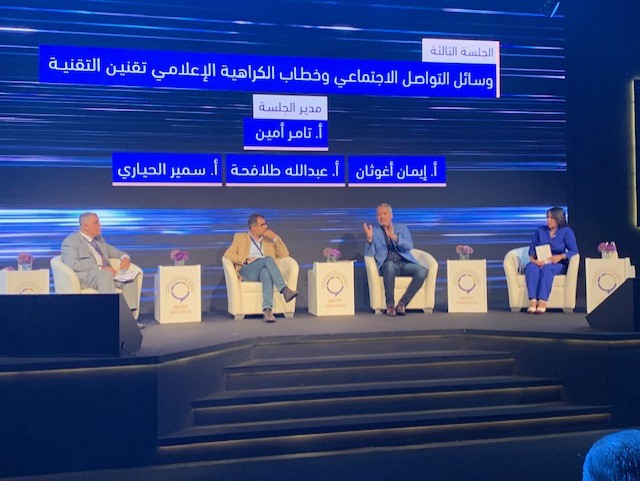 Speaking in a panel discussion on â€œSocial Media and Hate Speechâ€ at the â€œMedia Against Hateâ€ conference in Amman, Jordan, Samir Al Hiyari, a media professional from the United Arab Emirates, said that unlike the Western world where people can use social media responsibility, many young people in the Arab region do not care what they share on social media and thus find themselves spreading messages of hatred and discrimination.

“The definition of hate speech has not been clearly mentioned and that is why some people may continue to post negative comments that incite discrimination without necessarily knowing that they are spreading hate,” he said. .

â€œThe introduction of stricter online regulations should be the way forward for many Arab countries to control people who misuse social media to advance their personal interests which, in turn, affect others. “

Al Hiyari also highlighted the need for social media influencers to produce useful and educational content that can benefit society.

â€œInfluencers need to produce content that has a positive impact on their followers, not posts that mislead people,â€ he said.

Jordanian media expert Abdullah Talafahah on whether social media users can censor themselves is not easy for people to control themselves over what they post on social media.

â€œTherefore, it is good that nations come up with a clear definition of what hate speech is and enact strict rules and regulations to control the use of social media,â€ said Talafahah.

â€œThere should be heavy fines for people who violate social media rules, like the UAE has done. The UAE Cybercrime Law imposes a jail term and a fine of up to Dh 500,000 for anyone who posts insulting comments online or sends slanderous and defamatory messages to others via the internet .

Imaan Aghuthan, a Moroccan media expert, said hate speech has its own audience and a lot of effort should be made to educate young people about the negative effects of hatred and discrimination.

â€œSocial media influencers have both positive and negative content. It’s a good thing to identify those who share important and educational things. Those who negatively influence others should be penalized, â€she said.

“There is a need to support technically and financially credible influencers so that they can provide people with good content.”

Media experts pointed out that in some countries in the region, new freedoms were gained as a result of the revolutions or the Arab Spring and that young people were using freedom of speech and expression to spread false news and rumors. or incentivize information so that they can become popular.

A professional journalist from Kampala, Uganda, Ismail is a happy father with a strong attachment to family and great values â€‹â€‹for humanity. He has practiced journalism in the UAE for the past 13 years, covering the country’s parliament (FNC) and crimes including Abu Dhabi police, prosecution and courts. He also reports on important issues in education, public health and the environment, with a keen interest in stories of human interest. When he is no longer in office, he serves the Ugandan community in Abu Dhabi because he wants to see his compatriots happy. Exercising and reading are part of her free time.