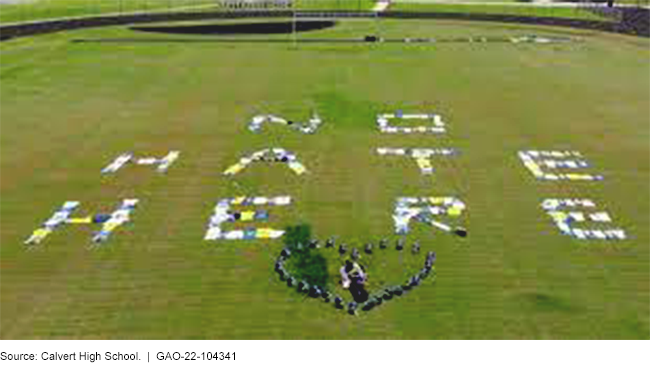 Students experience a range of hostile behavior in schools nationwide, according to GAO’s analysis of nationally generalizable surveys of students and schools. About one in five students aged 12 to 18 have been bullied each year in the 2014-2015, 2016-2017 and 2018-2019 school years. Among students who were bullied in the 2018-2019 school year, approximately one in four students were bullied on the basis of their race, national origin, religion, disability, gender or his sexual orientation. About one in four students aged 12 to 18 have seen hateful words or symbols written in their school, such as homophobic slurs and references to lynching. Most hostile behavior also increased in the 2017-18 school year, according to our analysis of the school survey. Hate crimes, which most often targeted students because of their race and national origin, and physical assaults with a weapon almost doubled (see figure). Sexual assault has also increased over the same period.

Almost all schools have used programs or practices to address hostile behavior, and their adoption by schools increased from the 2015-16 school year to 2017-18, according to our analysis of the school survey. About 18,000 additional schools implemented socio-emotional learning and about 1,200 more used suspensions in school. Additionally, 2,000 additional schools used School Resource Officers (SROs) – career officers with the ability to arrest students – during the 2017-18 school year. The involvement of PBOs in schools, such as problem solving, has also increased.

The Department of Education has resolved complaints of hostile behavior more quickly in recent years, in part due to the higher number of dismissed complaints and fewer complaints filed. In the 2019-2020 school year, 81% of these resolved complaints were dismissed, most often because the Education Office for Civil Rights (OCR) was not given permission to disclose the complaint. identity of the complainant to the persons against whom he lodged the complaint. Complaints of hostile behavior filed with the OCR decreased by 9% and 15%, respectively, during the 2018-19 and 2019-2020 school years. Civil rights experts interviewed by GAO said in recent years they have become reluctant to file complaints on behalf of students because they have lost confidence in the OCR’s ability to tackle violations. civil rights in schools. Experts cited, in part, Education’s cancellation of guidelines to schools that clarified civil rights protections, such as those for transgender students. Since 2021, Education has started to revise or reinterpret some of these directions.

Why GAO did this study

Hostile behavior, including bullying, harassment, hate speech and hate crimes, or other types of victimization such as sexual assault and rape, in schools can negatively affect mental health, education, income and all students in Kindergarten to Grade 12. well-being. According to Education guidelines, incidents of harassment or hate, when motivated by race, color, national origin, sex (including sexual orientation and gender identity) or disability status can hinder access to equal education. Under certain circumstances, these types of incidents may violate certain federal civil rights laws, which the Education OCR is responsible for enforcing in K-12 schools.

GAO conducted descriptive and regression analyzes on the most recent available data for two nationally generalizable federal surveys: a survey of 12 to 18-year-old students for the 2014-15 school years, 2016-17 and 2018-19, and a survey of schools for the 2015-16 and 2017-18 school years. GAO also analyzed 10 years of civil rights complaints filed with the OCR against schools; reviewed relevant federal laws, regulations and documents; and interviewed officials of federal and national organizations responsible for education and the defense of civil rights. GAO has incorporated technical comments from Education, where applicable.