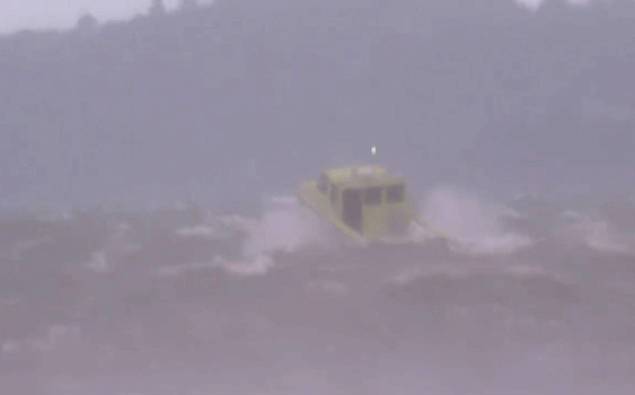 Two kayakers who launched a rescue mission in storm-swept Wellington Harbor this morning say they were in no danger.

â€œIt was great, we live for that stuff,â€ one of the men told 1News, wet and icy, after landing on Petone Beach.

A report was received at 7:55 a.m. from a member of the public saying a kayaker was in possible difficulty off Marine Parade, police said.

â€œA second kayaker was also in the area and was seen paddling towards the first one. The person who made the report then lost sight of the two kayakers, but it is believed they may have headed towards Eastbourne. “

Both men were wearing life jackets.

The couple were later found safe in Petone, but now say the search was unnecessary and they were safe from the start.

Eric, one of the paddlers, told 1News that the two men were “experienced” and “still playing it safe”.

“It was awesome, we live for that stuff, going out before work and enjoying it, really good surfing.”

He added that the two paddled frequently in similar conditions to today and never paddled too far apart.

Speaking to the Herald in Owhiro Bay, Wellington Mayor Andy Foster said he was baffled by the behavior of the kayakers.

“It’s the kind of thing you go to, ‘What the hell were you thinking.’

â€œIt’s absolutely crazy to be outside in this kind of weather condition.

“There are obviously very competent kayakers out there, but you are putting yourself in danger and you are also endangering other people. This is not responsible behavior.”

The Herald asked police how much the search cost and whether the two men would be charged.

A police spokeswoman said she had no further comments on the rescue, but urged residents to only head for the water if it’s safe and tell others where they are. go and what were their plans.

“Conditions are dangerous on the water and on the roads due to the high winds, and we urge people to take precautions and stay safe.”

Editorial: 5 years after hate speech law, Japan must do more to end discrimination

Testimony to begin in the civil lawsuit against Alex Jones, who falsely said the…