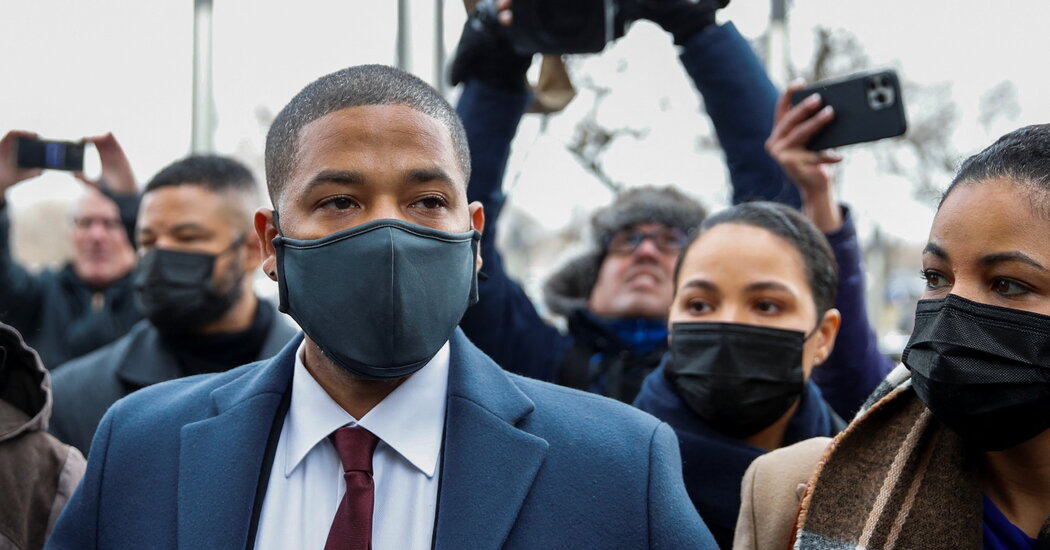 A Chicago judge sentenced Jussie Smollett to Five months in jail on Thursday, ordering the actor’s imprisonment for falsely telling police he was the victim of a racist and homophobic attack in 2019.

At the end of a hearing that lasted about five hours, Judge James B. Linn excoriated Mr. Smollett from the bench, saying he had concluded that the actor planned the hoax and that despite his admirable past work and that of his family in terms of social justice. , he had an arrogant and selfish side and had planned the stunt because he “needed attention”.

In the searing speech, the judge said Mr Smollett’s name had become synonymous with a lie, that he had sought to hold a ‘national pity party’ for himself and that Mr Smollett’s conduct had undermined other victims of hate crimes at a sensitive time. , as America tried to come out of its painful history of racism.

“You removed scabs from healing wounds and tore them open,” the judge said. “And for a reason: you wanted to make yourself more famous.”

Given the opportunity to address the court before sentencing, Mr. Smollett declined. But after Judge Linn read his sentence, the actor defiantly stood up and said, “I didn’t do this and I’m not suicidal”, adding that “if anything happens to me when I’m going in there, I didn’t do it for myself.” As he was taken into custody to begin his prison term, Mr Smollett raised his right fist. His lawyers immediately said they planned to appeal.

During the hearing, the defense and the prosecution presented very different views on Mr. Smollett’s offence. Prosecutors framed it as a calculated plan to fool law enforcement and the public at a time when hate crimes were on the rise. Lawyers for Mr Smollett described it as a low-level, petty crime that had received inordinate scrutiny from prosecutors.

“Why are we jumping up and down and acting like it’s a murder case?” said Nenye Uche, a lawyer for Mr. Smollett. “It’s not.”

Actor Jussie Smollett was found guilty in December of falsely claiming to have been the victim of a racist and homophobic attack in 2019.

Daniel K. Webb, the special prosecutor who handled the case, argued in court that Mr. Smollett had aggravated himself by declaring his innocence to the jury.

The judge ultimately sided with the prosecution.

At trial, Mr Smollett was found guilty of disorderly conduct, which carries a sentence of up to three years in prison. The judge decided on a shorter sentence, to be served in a local jail, and also handed Mr. Smollett more than two years probation and a $25,000 fine. He was also ordered to pay more than $120,000 in restitution for the cost of the Chicago police investigation into his case.

Prior to sentencing, well-known figures like the Reverend Jesse Jackson; Samuel L. Jackson and his wife, actress LaTanya Richardson Jackson; and Derrick Johnson, the president of the NAACP, wrote letters to the judge asking him to waive a prison sentence. Supporters argued Mr Smollett had no previous crimes on his record and suffered reputational damage after police accused him of orchestrating a prank attack.

On Thursday, Mr. Webb recommended that Mr. Smollett be jailed indefinitely, arguing that his misconduct was serious, that he had lied to the jury and that he had shown no contrition.

“What Smollett did in this case is he denigrated, degraded real hate crimes and he marginalized people who are real victims of hate crimes,” Mr. Webb told the judge.

The sentencing caps more than three years of twists and turns in a case that has inflamed political divisions and sparked controversy among Chicago officials. For days Mr Smollett was seen as a victim, someone who had been beaten and targeted with racial and homophobic slurs. Even after authorities challenged his version of events, it looked like Mr. Smollett would avoid significant criminal penalties. Prosecutors dropped charges against him in March 2019. But in 2020, Mr. Smollett was charged again after Mr. Webb relaunched the investigation into what happened in the early morning hours of January 29 2019.

The case was closely followed nationally, and in Chicago the issue became particularly potent, as the prosecutors’ decision to drop the charges split their office and the police department; the issue has also become a central source of criticism against Kim Foxx, the county’s chief prosecutor, during her recent campaign for re-election.

During the trial, the prosecution told the jury that Mr. Smollett ordered two brothers, Abimbola Osundairo and Olabinjo Osundairo, to attack him near his Chicago apartment, where they placed a rope around his neck like a noose and shouted, “This is MAGA Country.

The Osundairos each testified at length, explaining how Mr Smollett guided them through a ‘dry run’ of the attack and asked one of them to ‘pretend to beat him’.

Mr Smollett, 39, who in 2019 was best known for starring in the music industry drama ‘Empire’, maintained his innocence during seven hours of testimony over two days, telling the jury he had been victimized of a true hate crime. . His lawyers argued in court that the Osundairo brothers valued their closeness to celebrity and wanted to scare Mr Smollett enough to hire them as his security guards.

The lawyers also pointed to homophobic comments by Olabinjo Osundairo, suggesting the attack may have been motivated by prejudice against Mr Smollett, who is gay. (On the stand, Mr. Osundairo repeatedly denied being homophobic.)

The prosecution’s evidence included CCTV of the men gathering for what the brothers called a ‘blank run’ and Mr Smollett’s Instagram posts to Abimbola Osundairo shortly before the attack in which the actor provided updates on the timing of his flight back to Chicago.

The defense disputed that Mr Smollett planned the attack, arguing that the messages and images were evidence that he interacted with Abimbola Osundairo because he provided the actor with physical training.

The 12-person jury in December found Mr Smollett guilty on five of six counts of criminal disorderly conduct linked to his police report.

Judge Linn announced his decision after denying the defense’s request to overturn the conviction or obtain a new trial for the actor.

Much of the hearing was devoted to efforts by the defense to argue that Mr Smollett deserved a new trial and should certainly not be jailed. The Leighton Criminal Courthouse courtroom contained several members of his family, including his older brother, Joel Smollett Jr., and other supporters, such as former “Empire” music manager, Rich Daniels. Mr. Daniels took the witness stand to speak about Mr. Smollett’s character, giving examples of what supporters described as a generous and humble spirit.

“Incarceration of any kind would send the wrong message,” said Joel Smollett Jr., as Jussie Smollett wiped tears from his eyes, “especially at a time when we as a nation have expressed, in a bipartisan plurality, the desire to see real criminal justice reform.