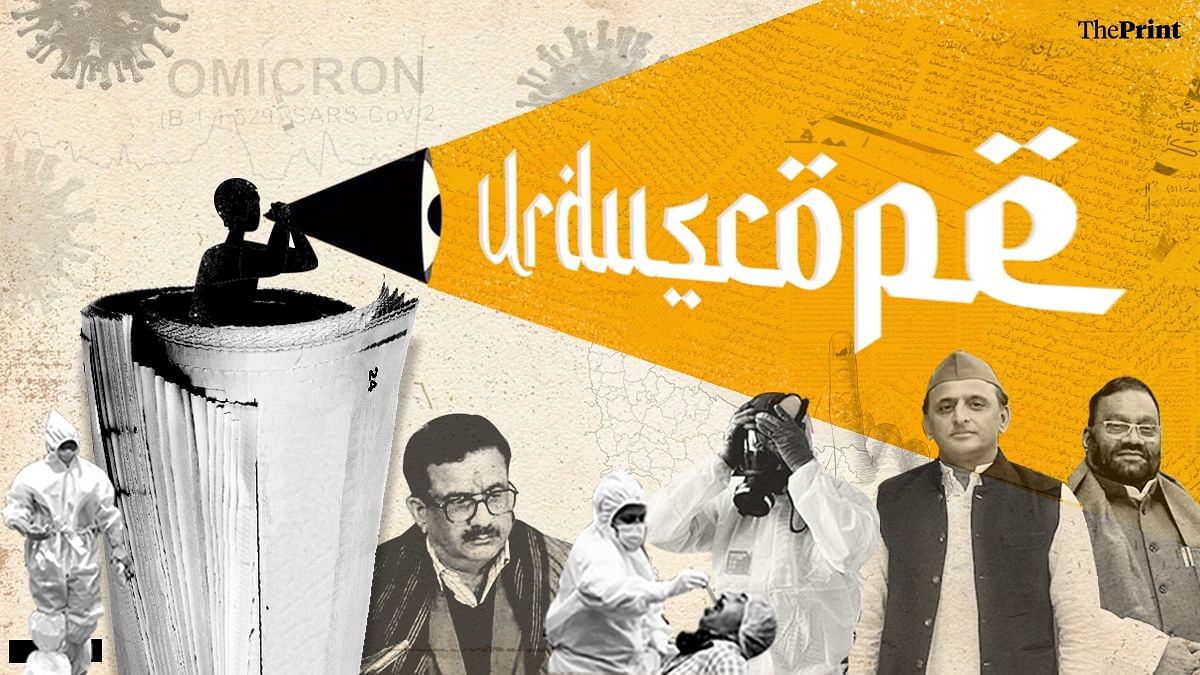 Jitendra Tyagi Arrested, BJP Exodus in UP & Covid – What Made Pg 1 News in Urdu Press

New Delhi: As Covid-19 dominated lives and again threatened livelihoods across the country, it returned to the front pages of most major Urdu newspapers, but unlike the past – when it was for weeks almost the only information covered – he had to scramble for space along with a myriad of other issues, such as the increase in hate speech reported in different parts of the country, the ongoing political warfare of words over the “breach” in the Prime Minister’s security in Punjab, but above all, the upcoming UP elections.

ThePrint brings you insight into what made Urdu headlines, in a diverse and highly political week in the Covid era, and the editorial stances taken on it by some leading newspapers.

Rumors of alleged hate speech at Haridwar Dharam Sansad reverberated through the pages of Urdu newspapers throughout the week, with Friday’s arrest of Jitendra Tyagi – formerly known as Waseem Rizvi – making headlines. both Siasat and Inquilab. According to Inquilab, the arrest was the result of Supreme Court oversight.

The issue has rarely made headlines throughout the week, since the SC decided to hear a petition filed by Jamiat Ulama-i-Hind, journalist Kurban Ali and others against alleged hate speech of January 10.

In an editorial on January 13, Inquilab says while an SIT has been formed to investigate the matter, it is unclear what it will actually investigate, as evidence of hate speech is widely available on social media and other online platforms. He alleged that if the police had been inclined to act, they could have done so based on these videos, but it appears that they did not receive “clearance from the state government”.

The long line of exits from the ruling BJP in Uttar Pradesh also kept Urdu newspapers busy all week, as did the flurry of announcements from various political parties.

In his coverage of the first slate of congressional candidates for the elections, Siasat wrote on its front page on January 14 that the party’s decision to give 40% of tickets to women and 40% to young people is a “historic” decision. It also contained a statement by former minister and new Samajwadi party leader Swami Prasad Maurya that the UP assembly elections would be the “final nail in the coffin of the BJP”.

A day earlier, the second advance in Inquilab was about Minister Dara Singh Chauhan quitting the BJP. The newspaper described it as another blow to the BJP’s prospects in UP. He also gave a prominent display on the front page of an article about a warrant against Maurya.

In his editorial of the same day, Roznama Rashtriya Sahara wrote that election season is a time for politicians to change loyalties, but their real motivation for such changes is self-interest and their chances of winning with a given party. The newspaper also said that if the trend of leaders leaving the BJP in the UP continues, the National Assembly elections will not be easy for him.

On January 13, the Siasat The editorial said the BJP exodus would raise questions about the leadership of Chief Minister Adityanath and could prompt the central leadership to flex its muscles further.

Roznama, in another op-ed on January 10, wrote that while the election will be about issues like inflation, unemployment and Covid, the final tally will show the importance voters place on those issues.

On January 12, the two Roznama and Inquilab published front-page stories about the decision of BSP Supremo Mayawati and General Secretary Satish Chandra Mishra not to run for office.

Read also : Three factors that tell us who has an advantage in UP elections under the Covid cloud

The spike in Covid cases across the country, which is believed to have been fueled by the Omicron variant, grabbed headlines throughout the week.

The number of daily cases surpassing the one lakh mark was on the front page of Inquilab on January 8, as well as an excerpt from a “warning” to the Electoral Commission of the Ministry of Health on the situation of the pandemic.

On January 10, as the number of daily new cases crossed the 1.5 lakh mark, Siasat led with the news on Prime Minister Narendra Modi’s emphasis on accelerating vaccinations for children during a videoconference with officials across the country. Inquilab January 12 announced the tightening of Covid restrictions in Delhi, following a meeting of the Delhi Disaster Management Authority, and a warning that the next two days would be crucial for the capital. He also played on the Delhi government’s pledge to step up vaccinations.

The same day, Siasat published a front-page story about Pfizer’s announcement that a vaccine against the Omicron variant would be available by March. He also published a report on a Delhi government analysis which found that 11 of the capital’s 146 deaths were among fully vaccinated people.

The issue of the prime minister’s “security breach” in Punjab also remained top of the pages this week.

In an editorial on January 9, Inquilab praised the SC’s directive to the Punjab and Haryana High Court to take all documents relating to the incident into its custody and said it was important that an investigation into the failure be carried out in a fully non-partisan. A day earlier, the newspaper had published the news of the SC order on the front page.

In a caption to his January 11 report on the front page of CS’s decision to form a commission of inquiry into the incident, Siasat wrote that the court had expressed its dissatisfaction with the show cause notice served on the senior Punjab police officers in this case, by the central government. The next day, Roznama published a front-page story about Judge Indu Malhotra leading the investigation.

Read also : Why current defections in UP should not worry BJP. There is no more Jayaprakash Narayan now

UN concerned about rise in hate speech in Bosnia and Serbia