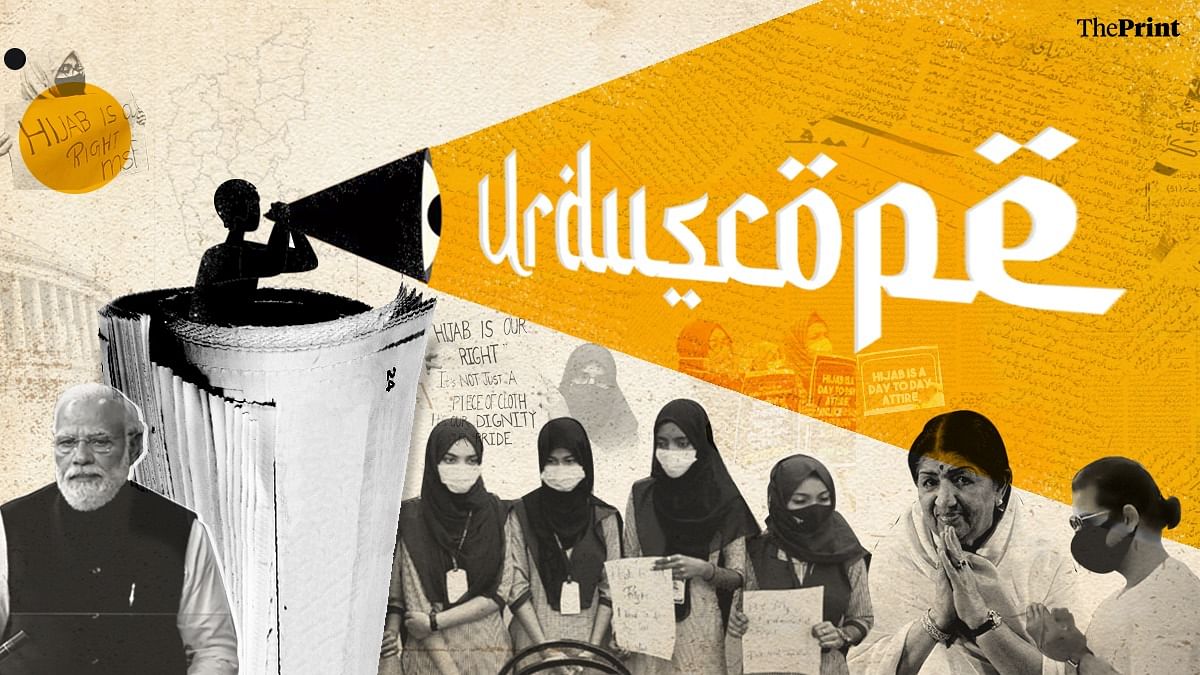 New Delhi: For weeks, the protest of a handful of young Muslim students in Udupi, Karnataka, demanding that they be allowed to wear the hijab in classrooms, had only made headlines in the Urdu media. Now that these girls and their demands have captured national attention, reached the Karnataka High Court and Supreme Court and become part of the country’s political discourse, the Hijab dispute and its repercussions have become the most prominent issue. in Urdu newspapers, often even pushing news of the Five-State Assembly elections off the front pages.

ThePrint brings you a roundup of this week’s news and views from the Urdu press.

The news of a request by a handful of students at an educational institution in Udupi to be allowed to wear hijab in class, which had been making headlines in Urdu for several weeks, has now made the rounds. snow into a public order crisis. in Karnataka and a nationally polarizing issue.

The issue continued on the front pages of Urdu newspapers all week, with every development, from protests to the harassment of a hijab-wearing girl in Mandya, and the court battle over the issue making headlines.

In its February 5 edition, Siasat carried a picture of Kondapura in Karnataka, where boys sat in the street supporting the demand of female students to be allowed to go to school in hijab. On February 7, Roznama Rashtriya Sahara brought to the front page the challenge of Kaneez Fatima, Congresswoman for Gulbarga (North), to the state government to try to prevent her from wearing the hijab in the Karnataka Assembly.

February 6 Siasat brought to the front page Congress leader Rahul Gandhi’s statement that the hijab row in Karnataka amounted to preventing girls from studying and was not acceptable. In its February 9 editorial, the newspaper writes that the “hate campaign” against Muslims was sometimes based on the food they eat, but has now extended to what they should or should not wear, including including the hijab. He stressed the importance of not letting the atmosphere deteriorate in educational institutions.

In a February 11 editorial, Inquilab wrote that Muskan Khan – the young woman who was accosted on her way to her university in Mandya by saffron-clad hooligans and responded by chanting “Allahu Akbar”, had won hearts. He also said that a non-issue was allowed to grow to gigantic proportions in order to make political hay and that’s why “no tweets were made against hooligans disrupting the motto of ‘beti padhao’ or against the State officials on whom the responsibility of the ‘beti bachao’ rests”.

In its page a main article of February 9, Siasat wrote “Maybe BJP wants to win UP election on hijab issue”. The newspaper claims that wearing the hijab has never been a problem in India, or anywhere else in the world, for its 1,450 years of existence. It has only become the focus of political tensions when there are political gains to be made from such provocation.

February 10, Roznamawhile reporting on the development of the hijab controversy, also published two front-page statements – one by Minister of Minority Affairs Mukhtar Abbas Naqvi, alleging that the controversy is the work of communal and criminal elements, and another from Congress General Secretary Priyanka Gandhi, who said no one has the right to decide on behalf of a woman what she can or cannot wear.

Prime Minister Narendra Modi’s speech to Muslim women on February 10, as large swathes of western Uttar Pradesh (which has a large Muslim population) voted for the new assembly, grabbed the headlines of both Siasat and Roznamaalongside stories from the ongoing hijab row.

February 7 Roznama published a front-page story about Minority Affairs Minister Mukhtar Abbas Naqvi offering a chadar to Ajmer Sharif Darga on behalf of Prime Minister Modi. Modi’s speech to the Lok Sabha where he ripped into the main opposition Congress, calling him the leader of the ‘Tukde Tukde Gang’, was on the front page of Inquilab One day later.

Roznama, in his February 10 op-ed, wondered why the “people in power” are so afraid of Congress, even years after its exit from central government, that instead of answering questions raised by the opposition, they have turned Parliament into a forum for expressing their “hatred” of Congress. The newspaper asks why the Prime Minister is not as concerned about hunger, inflation and unemployment as the Congress party.

The death of Lata Mangeshkar and the SRK controversy

The death of Bollywood nightingale Lata Mangeshkar and the unseemly controversy involving actor Shah Rukh Khan at his funeral has captured the headlines of most Urdu newspapers.

On February 7, the headline of Siasat has been “Meri awaz hi pehchan hai, gar yaad rahe (my voice is my identity, if you choose to remember me)” – from one of the singer’s countless hits. Besides the news of the death of the “queen of melody”, Inquilab also posted a front-page snippet of the praise that poured in from world leaders for the late singer.

Referring to unsavory comments by some BJP leaders on visuals of Shah Rukh Khan praying at Mangeshkar’s funeral, Roznama in an editorial entitled “Spitting and blowing are two different things”, asked who would know the customs and traditions of India if the Indians did not know them? The newspaper argued that only people deny the “ganga jamuni tahzeeb (unity in diversity)” of this country, cannot tell the difference between spitting and blowing, because no conscientious person can spit on someone else and Shah Rukh being one of them does not didn’t either.

Overview of the electoral news of the assembly

Congress’s announcement of Punjab Chief Minister Charanjit Singh Channi as the chief ministerial face for the upcoming elections has been featured on the front pages of both Inquilab and Siasat February 7.

The same day Siasat also released a statement from Samajwadi party leader Akhilesh Yadav, who alleged his party was being targeted because of its growing support. On February 6, the Inquilab the lead concerned the BJP manifesto in Uttar Pradesh. In its February 7 editorial Siasat lamented that the media had stopped questioning those in power.

Kreator: behind-the-scenes footage from the filming of the video “Hate über Alles”