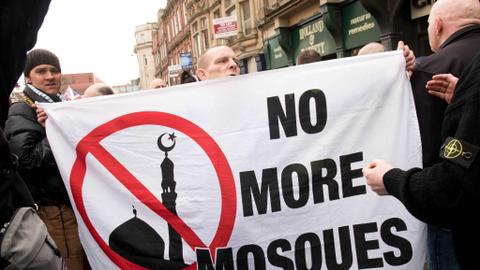 Islamophobia in Europe at ‘point of no return’, new report warns

Far from reducing anti-Muslim hate crimes, the pandemic has accelerated some of the worst narratives against Islam and Muslims, according to a new study.

A new report on Islamophobia in Europe warned that hate crimes against Muslims on the continent had “worsened, if not reached a tipping point,” over the past two years.

The pandemic has resulted in relatively fewer physical attacks on Muslims and their places of worship, but it has not resulted in less hate speech. Instead, according to the authors, there has been an increase in hate speech online, which has longer-term implications for how Islamophobia is fought across the continent.

Enes Bayrakli, one of the report’s co-authors, described the increase in online abuse directed against Muslims as a “significant trend”.

â€œThis is worrying because online narratives do not stay online and can create a climate conducive to physical attacks in the real world,â€ Bayrakli said. at TRT World.

A 2020 report on online trends in Islamophobia found ubiquitous examples of fake news, which included themes that Muslims were super-diffusers of Covid-19, that mosques were vectors of covid, or that pandemic rules were applied more leniently towards Muslims for fear of being accused of racism.

This fake news represented an intersection and development in narratives against Muslims which are common themes among Islamophobes.

The mainstream media have also contributed to the idea of â€‹â€‹linking images of Muslims to the pandemic and thus legitimizing negative tropes about Muslims and the pandemic.

When asked why this was important, Bayrakli said that “Macron has become the face of institutional and structural Islamophobia in Europe. His policies directly target, discriminate and criminalize Muslims in France.”

There are few countries in Europe where Islam and Muslims are as closely watched as in France.

“There are of course other politicians in Europe who follow the same policies as France”, says Bayrakli, but France applies “Islamophobic practices at the state level vis-Ã -vis their Muslim minorities,” he said. he adds.

Just this week, two mosques were attacked in France amid growing anti-Muslim rhetoric from the country’s political establishment, which increasingly views Muslims as a threat inside.

France has closed more than 17 mosques for breaking vague “security laws” or not having good “security standards” over the past two years. 89 additional mosques are also under surveillance.

According to this year’s report on Islamophobia, the systemic pressure exerted by France on Muslims has resulted in “an unprecedented increase in the number of police searches, threats of eviction, as well as closures of mosques and schools. , including the dissolution of a humanitarian NGO and a Muslim human rights organization. in France against racism and discrimination. “

When put together these actions, the report warned, “threatened the fundamental freedoms of Muslims.”

Other conclusions of the report

While in many countries of Europe Islamophobic crimes have declined, according to this year’s Islamophobia report, Germany has turned the tide.

More than 901 Islamophobic crimes were committed across Germany in 2020, of which 146 targeted mosques and 48 targeted people. At the same time, anti-Muslim social movements organized their rallies despite the pandemic.

The report criticized many European states for failing to report Islamophobic incidents as a separate category of hate crime.

â€œThe recording of anti-Muslim / Islamophobic crimes by the police as a separate category of hate crimes is essential to uncover the true extent of this problem and to develop counter-strategies to combat it. “

Muslims in Austria also had another difficult year, with hate crimes more than doubling to 812 reported incidents.

Austria’s Muslim community also had another difficult year, according to the report.

The raids were carried out at the behest of then-right-wing Home Secretary Karl Nehammer, resulting in heavily armed forces breaking into homes early in the morning.

The government hailed the raids as a success. However, the lack of results has cast doubt on the purpose of the raids in a country that is increasingly experiencing an increase in anti-Muslim rhetoric.