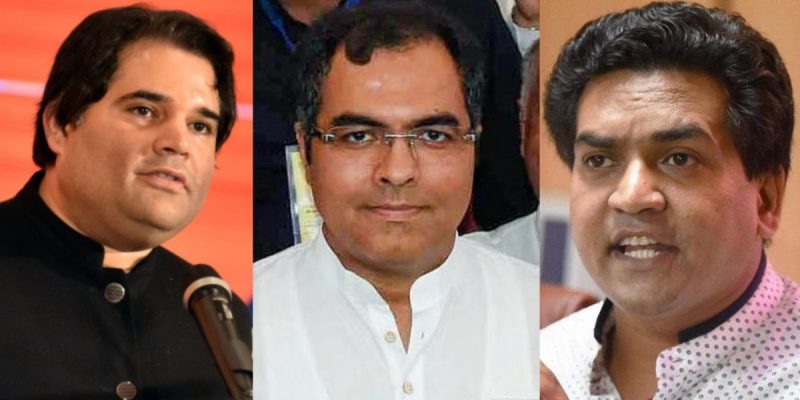 New Delhi: Why have many young leaders of the Bharatiya Janata Party (BJP), many of whom were brought up in multi-religious and secular backgrounds, started speaking the language of hate?

Is it because they somehow feel compelled to use the tone and tenor that propelled senior party leaders to the heights they now command? Or have the political atmosphere and social divides in the country become so tainted and deep that it is the only type of language they believe would appeal to the masses?

These are some of the questions that arise when one sees repeated utterances, amounting or akin to hate speech, from these relatively young politicians.

The latest such episode involved West Delhi BJP MP Parvesh Verma who along with several other speakers was accused of doing inflammatory speeches at a Virat Hindu Sabha meeting held in northeast Delhi earlier this month. Incidentally, communal riots had claimed the lives of 53 people, the majority of them Muslims, in the same district of Delhi in February 2020.

A murder case was used to breed hatred

The meeting, it was reported, was called to protest the brutal murder of a youth, Manish, over what Delhi police said was an old rivalry. While six defendants – Sajid, Aalam, Bilal, Faizan, Mohsin and Shakir – have been arrested, right-wing groups have tried to use the incident to sow hatred.

Verma did not name any particular community in his speech but called for a “total boycott” of “these people” – leaving little to the imagination as to who he was referring to.

He was quoted as saying, “Wherever you see them, I say if you want to set them straight…then there is only one remedy and that is full boycott…Are you d okay with that? Raise your hand if you agree. Say with me, we will boycott them completely, we will not buy any goods from their stores, we will not employ them”.

Although he later defended his speech by saying he had only called for a boycott of those who engaged in violence, several Muslim organizations – including All India Majlis-e-Ittehadul Muslimeen (AIMIM) and Jamiat Ulama -i-Hind – had protested the event and demanded action against Verma and others who spoke there.

The Jamiat had also reported that its delegation visited the Delhi Police and urged the Special Commissioner of Police (SC) to ensure that a First Information Report (FIR) was filed against the speakers. The police, he said, had only registered one case under Section 188 of the Indian Penal Code (IPC) against the organizers of the event for failing to take permission to hold .

While Verma, who comes from the Jat community, is known for his outspokenness in matters of religion, what surprises many is how the son of former BJP Delhi Chief Minister Sahib Singh Verma , was able to take such a drastic approach.

Sahib Singh has never been known to have ill will against minorities. In fact, when he won the former Outer Delhi Lok Sabha seat, it was the most populous in the country and represented 21 of the nation’s capital’s 70 assembly segments – many of which had sizeable minority populations.

The central BJP party is now said to have been seeking details of the incident involving Verma, apparently since Gujarat assembly elections are imminent and the party does not want to antagonize the Muslim community in Pasmanda, which is largely involved in commerce and business and whom he tried to woo in the state.

The BJP is now also aware of the backlash that may come from Islamic (and other) nations in these matters. Not so long ago, former party spokesman Nupur Sharma’s controversial comments about the Prophet Muhammad fueled major controversy and drew condemnation from several nations in the Arab world and beyond.

But so far, the BJP has not issued any sort of warning to Verma for his remarks. It also demonstrates the changes that the saffron party has witnessed over the past two decades. Previously, he often used to criticize or admonish his leaders when he felt they were crossing a certain line.

From “center-right” to “ultra-right”

One may remember 2009 when former Pilibhit BJP candidate Varun Gandhi made joint remarks leading to the registration of an FIR against him. At the time, the BJP denounced his actions.

Varun, who is the son of the late Sanjay Gandhi and Maneka Gandhi, was quoted as speaking out against Muslims at a campaign rally. “It is not a hand (symbol of Congress), it is the power of the lotus (symbol of BJP). It will cut off the head of… Jai Shri Ram,” a report by the PTI news agency quoted him as saying. .

Varun’s aunt and Congress leader Sonia Gandhi was among the first to criticize his remarks as “unethical and unethical”. The BJP also distanced itself from the vitriolic comments. Its then leader, Mukhtar Abbas Naqvi, called the speech a “manifestation of his family’s past Congress culture” and insisted that the outburst “did not reflect the traditional culture of the BJP”.

As with Verma, it was hard to understand what drove someone like Varun, known among those close to him for being of a center-left mindset, to exhibit such a facet of his own.

Then, ahead of the 2014 Lok Sabha elections, when Bihar BJP leader Giriraj Singh called people arresting Narendra Modi ‘pro-Pakistan’, threatening that they ‘will have no place in India” after the arrival of the BJP. power, the party had once again urged its leaders to “show restraint”.

Does a radical approach ensure a rise on the political ladder?

However, now firmly entrenched, the BJP no longer feels the need to chastise – at least publicly – those of its leaders who think hate speech will help them rise up the political ladder.

And that seems to be why people like Verma or Kapil Mishra, who was an Aam Aadmi Party (AAP) MP before joining the BJP in 2019, feel compelled to make such statements.

In Mishra’s case, months after joining the Saffron Party, he sparked major controversy in January 2020 when he compared the upcoming Delhi Assembly polls to an India v Pakistan game. The following month, during a rally against anti-CAA protesters, he was accused of trying to intimidate the police into expelling the protesters from the Jaffrabad and Chand Bagh areas within three days and of ‘threatening to take matters into their own hands afterwards, saying they would “take to the streets” and “not stay peaceful”.

A few hours after this speech, violence broke out in northeast Delhi. Even East Delhi MP Gautam Gambhir said “Kapil Mishra’s speech is not acceptable”. But Mishra was not punished for incitement to violence.

He has since become a regular face on TV debates to present far-right views on issues. What still baffles many is how a man, who in 2016 called Modi an “ISI agent” at the Delhi assembly, was able to change his color so quickly and drastically.