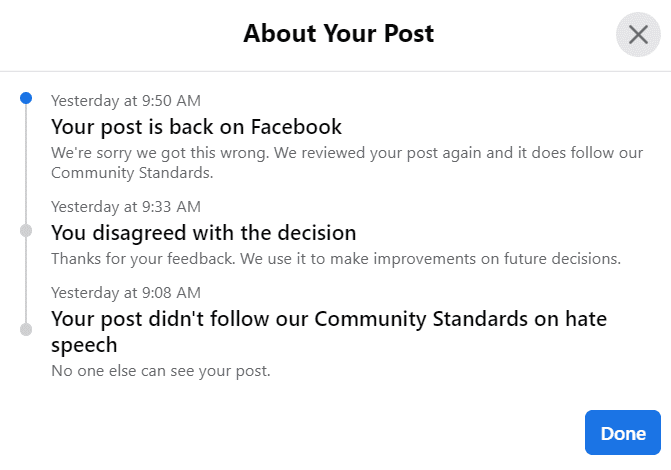 Yesterday I was thrown in jail on Facebook for hate speech. I am currently serving a 3 day sentence (6 days for any group activity). But here’s the thing: the hate speech was AGAINST me, not OF me.

Around 8:00am PST, a rando slipped into my DMs and sent me the following:

In case you weren’t aware (I also had to look it up on Urban Dictionary), a aunt is an Australian slur for homosexuals or otherwise “effeminate”. Since I’m bi, it’s an insult directed at me.

After a good laugh, I shared a screenshot of this with my nearly 7,000 Facebook followers. I also blocked and reported this homophobe. Within an hour, Facebook had locked my account for making “hate speech”. Immediately I challenged the decision and to my surprise within 40 minutes they agreed and apologized.

However, even though they apologized and explained how they “did it wrong”, I’m still in jail on Facebook. My account is restricted for another 2 days and I can’t engage with the groups I help manage for another 5 days. For almost a month, the algorithm will hide my posts in the groups I’m in.

TO BE CALLED A HOMOPHOBIC OFFENSE!!!

Now I realize a lot of this is algorithm based. But after acknowledging that they were wrong, it seems to me that a real human interacted with this message. That’s why they reversed the algorithmic decision. And yet, I’m still stuck. I’ve been harassed for being openly bisexual, called the Australian equivalent of af*gg*t, and punished by the social media platform that’s supposed to be responsible for weeding out this kind of talk.

Well, in this case, and I suspect in many others, they were horribly wrong. Will they care? No. Will they hear the 4 complaints I’ve made since yesterday? No. Will they change their habits? No. Because they make a ton of money and in today’s society that’s what ultimately matters. They’ll talk a big game about LGBTQ inclusion, but at the end of the day, they’ll continually get it wrong.

If you want to know me better, do not hesitate to follow me on social networks. I am quite active on all platforms:

Also, if you’ve dug my work here and want me to be able to continue writing as close as humanly possible to writing full-time, please check out my Patreon page at www.patreon.com/ mjdistefano. Even $1 a month helps tremendously!!!