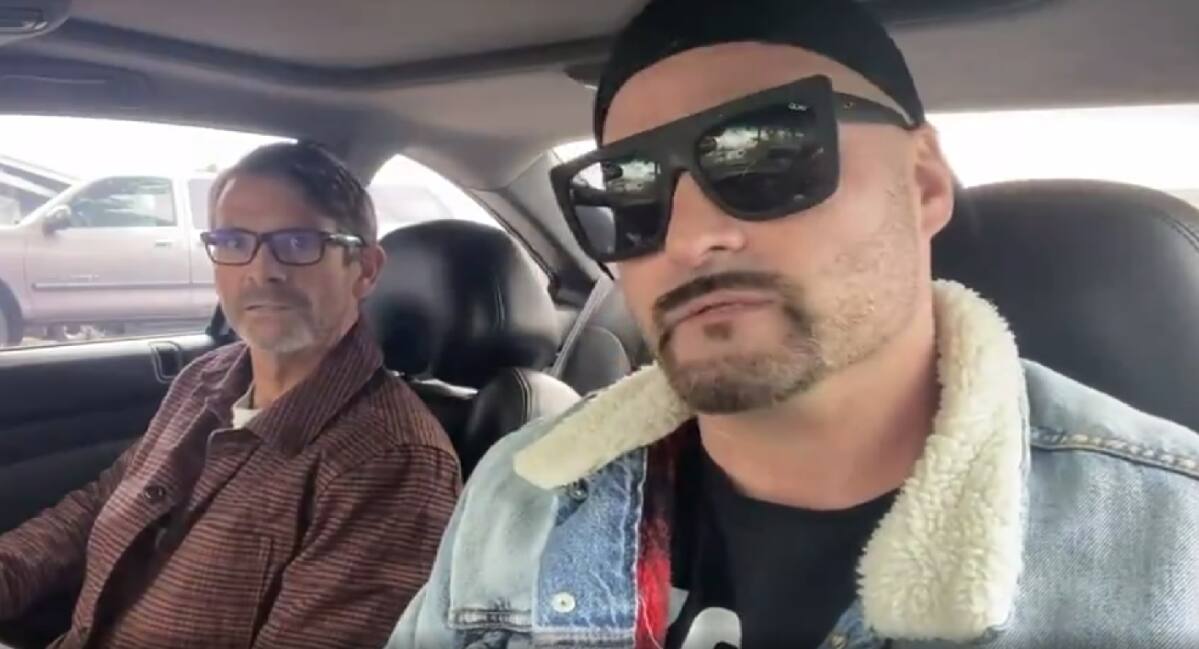 I knocked on the door of an anti-Semitic hatemonger on the Internet. Here is what happened

It started, Minadeo said, when he began investigating the chemical company Monsanto. Or maybe it was when he got into gambling and found out about the religious affiliation of media moguls. Or was it out of solidarity with the Palestinian people? His story was fluid.

This is how we spent most of our time, with Minadeo citing tons of “evidence” of a nefarious global conspiracy. But I had no desire to argue with him. I’m also not particularly interested in analyzing his points now. All of them have been thoroughly debunked for anyone not in the smallest and most toxic of echo chambers.

Minadeo referred to its examples as “pattern recognition”. I call them fantasies, or at least cherry picking.

I will offer an example here. It was one of the flyers that led me to that eerie moment — one that trumpeted ‘ALL ASPECTS OF THE BIDEN ADMINISTRATION IS JEWISH’ and offered, as evidence, mug shots of 12 prominent people surrounding the president. , as well as their roles.

Let’s leave aside an obvious rebuttal for a moment, that Jews should be rightly proud of their individual achievements after centuries of persecution. Let’s just analyze what Minadeo postulated.

I believe the 12 men and women on the flyer are Jewish. But if every aspect of Biden’s team is Jewish, it’s convenient to leave out the 18 cabinet members who, in fact, are non-Jews. Or the four senior military leaders of the United States. Or President Joe Biden, who is of course Catholic.

If this argument falls apart so easily, why even bother with an outlandish claim like “Jews control 96% of America’s media?”

For the most part, my interview with Minadeo was a repetitive game of cat and mouse. He constantly worked to highlight his most dominant opinions.

He said his main problem with Jews is that they are overrepresented in leadership positions. He advocated for freedom of speech, noting that several countries have banned Holocaust denial (Minadeo believes the number of Jews killed by Adolf Hitler’s regime was far below the accepted estimate of 6 million) . And he denounced Israel’s treatment of the Palestinians.

I would try to point out that the videos he hosts on his site go way beyond what he was telling me in the car. In the virtual setting, Minadeo gives Nazi salutes, talks about “those fucking Jews and their fucking schemes”, and taps not just ruthless CEOs, but all members of a religion and cultural heritage who can number 20 million worldwide.

When I brought this up, Minadeo was pivoting to another fringe theory or worn-out trope.

The other theme I tried to focus on was the potential for harm conveyed by Minadeo’s words. He repeatedly replied that he preached non-violence.

But anti-Semitic incidents are on the rise in America. The Anti-Defamation League, which has counted them since 1979, reports that 2019 and 2020 were two of the three worst years it has tracked. He hasn’t counted 2021 yet.

Jews live in fear again – or maybe they never stopped.

As Minadeo denied guilt for encouraging violence, I thought of Jeff Renfro, owner of Yoga Hell studio in Petaluma. Renfro told me he took his gun out of storage and loaded it for the first time in ages after he fired Minadeo’s girlfriend, because you never know who the Minadeo followers are.

I thought of Michéle Samson, president of Congregation Shir Shalom in Sonoma, describing how she finds herself staring at a dear old lady during worship services and wondering if she would have the strength to lift the woman out the window if the synagogue was attacked.

I also thought of my own family. My mother was Jewish, therefore I am Jewish. I don’t practice religion, but I lost relatives in the German death camps. My uncle Louis, now deceased, begged his children never to get tattooed; for him, the tattoos were numbers inked on the arms at Auschwitz.

I was surprised that Minadeo didn’t ask me about my religion. Maybe he assumed. When he posted the video of our interview, he included a Star of David emoji in the description. Of course, that could just have been his way of insinuating that I am controlled by Jews in those creepy shadows of mainstream media.

Anyway, I kept asking Minadeo: don’t you take some responsibility for the terror that one of your followers, drunk on your theories and implications, might inflict on Innocent Jews?

“I do not want and never condone violence,” he replied.

Especially the violence against Minadeo, perhaps. He said he was assaulted by a Jewish man during a stunt in Florida, and his neighbor’s apartment was vandalized “by Antifa” during one of Minadeo’s trips to Texas. He claimed that he will probably have to leave Petaluma because things are getting so uncomfortable for him. He also claimed he was threatened after the first Press Democrat article about him was published.

“I’m scared for my life, man,” Minadeo said. “You have to understand that a lot of people are willfully ignorant. And these people can be dangerous.

Fear for his life? Willful ignorance? Dangerous people? He seemed oblivious to the obvious irony of his statements.

Minadeo clearly wants to live in two worlds simultaneously. In one, he goes about his business in Petaluma, runs errands, and drinks microbrews like any typical dude. In the other, he’s a hatemonger on the internet, basking in the applause of avowed racists and Nazis who happily mock the burning of Jews in ovens.

The truth is, Minadeo can’t be those two people anymore, not in Petaluma. And he has already made his choice.

You can reach Phil Barber at 707-521-5263 or phil.barber@pressdemocrat.com. On Twitter @Skinny_Post.

Why the hell does Kirby hate this tree so much?