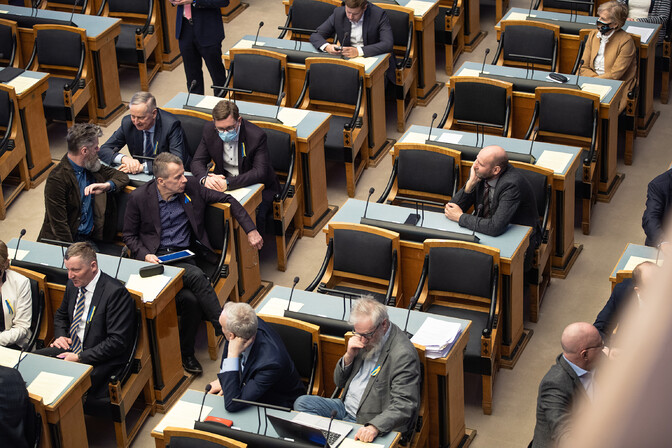 The bill to ban symbols of aggression will reach first reading in an amended form, the committee decided. The bill prohibits the use of symbols that justify abusers and prescribes penalties for joining an abuser’s armed forces.

“It was a unanimous decision to remove the section on hate speech. We reached a positive consensus, which I hoped for,” said committee chairman Marek Jürgenson (Centre).

Justice Minister Maris Lauri (Reform) said the decision was made with a heavy heart. Whether or not to include hate speech regulations in the bill has also divided opinion within the Center Party.

“Are we really going to punish people for holding up certain symbols, but consider verbal abuse, insults and general calls for violence as fines,” the justice minister said.

Lauri said leaving this section in the bill would have hindered its passage, but added that she believed Estonia would have to come back to the topic of hate speech in the near future.

After the first reading, a similar bill from the opposition Isamaa party will be attached to the government bill.

“We can still modify the text of the bill under advisement, the door is open to proposed amendments, and we still have some ideas on how to word things more precisely. I believe our intentions align on those of the government in the matter,” said party leader Helir-Valdor Seeder.

The Riigikogu is expected to pass the bill on April 21.

Case filed against clairvoyant for hate speech in UP