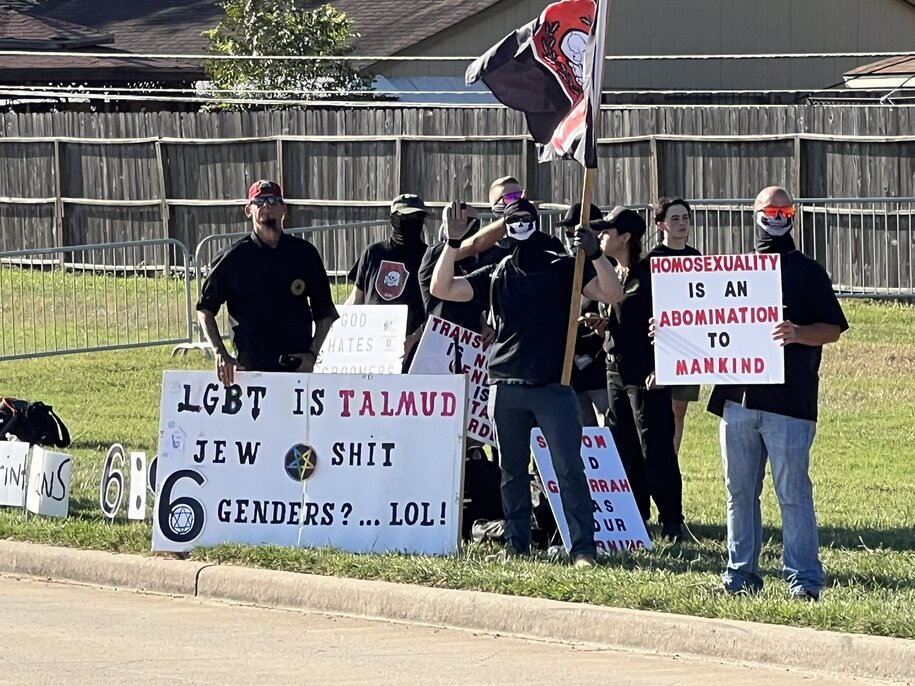 On a sunny late Saturday afternoon, right-wing groups descended on First Christian Church in Katy, Texas, a suburb west of Houston. Groups like the Proud Boys, the Patriot Front and Protect Texas Kids have shown extreme outrage at the church holding a drag queen bingo fundraiser to benefit Transparent Closet, a free clothing store for underprivileged transgender youth. Several groups of counter-protesters, such as the Screwston’s Anti-Fascist Committee, were also present. Tensions were high and many people, both among protesters and counter-protesters, were heavily armed.

NOW: A small religious group clashes with a group of anti-fascist activists who have gathered to defend a ‘drag bingo’ event outside First Christian Church in Katy, Texas. pic.twitter.com/3uzNlmOAVm

Prior to the event, several right-wing parents expressed vocal dissatisfaction with the drag queens.

Grassroots parent groups have vowed to protest the event, which they say is harmful to children.

Rebecca Clark, executive director of Fort Bend County Citizens Defending Freedom, said parents were outraged that the church planned to feature a “satanic” who had conspired against a school.

“We are done with tolerating the exploitation and sexualization of our children in this country,” Clark told The Epoch Times via text message.

Sarah Feigleson, a Katy resident and Fort Bend County education officer at the CCDF, wrote in a post that parents need to wake up.

“Drag queens and kids don’t mix,” she wrote. “These events take place in your garden. Stand up and do a respectful heckling.

Protect Texas Kids, an anti-LGBTQ group founded by self-proclaimed “Christian fascist” Kelly Neidert, was part of the protest; the group, which is the brainchild of the leader of the Young Conservatives of Texas (YCT) at the University of North Texas, wished “take a stand to protect children from the toxic and indoctrinating agenda of the left”. (This, while 66% of crisis calls to Rainbow Youth Project USA came from Texas, according to the Los Angeles Blade.)

This “church” will host a disturbing dragster bingo show for kids, with booze and special ticket options for 18+. Our friends in Houston are organizing a protest and we will join them. These sexually explicit performances must stop taking place in front of children.

Although the “Discussion” section of the Facebook event was small, there were some notable, if not terrifying, comments made on the single post, such as “A pedo’s dream,”California migrants should be tagged so we know who’s who in that state,” and a bogus communist rule that reads, “Bribe the young, keep them away from religion. Get them interested in sex.

The First Katy Christian Church, a Disciples of Christ church, has a history of acceptance towards LGBTQ+ people, dating back to 1979; the church had actively provided support despite acts of hate speech and vandalism against the church. Reverend Heather Tolleson of First Christian Church acknowledges that “not everyone agrees with us”, but she also proudly states, “WWe did what we had to do to care for and provide a safe environment. Transparent Closet itself opened in late 2020.

“We’ve set it up as a boutique where you can find something really cool to try on and keep, like jewelry, makeup, and clothes — anything someone exploring or transitioning might need. “, said Tolleson. “The explicit intent is for teens and young adults to have a place to go and explore and get what they need.”

On the other side of the street, the counter-protesters had a different message.

“It’s nonsense, because drag itself is just a costume,” said one person supporting the event. “It’s no different from someone dressing up as a superhero at a comic book convention or someone putting on a Halloween costume.”

“NOT ALL CHRISTIANS SUCK”

This is a pin I got from inside the First Christian Church who were responsible for organizing the “family” drag bingo event in Katy, TX. pic.twitter.com/C62r0sgd7s

Given the rise of right-wing extremism around the world, how much right-wing hate are you witnessing in your community? (On a scale of 1 to 7, 7 being the highest)

Given the rise of right-wing extremism around the world, how much right-wing hate are you witnessing in your community? (On a scale of 1 to 7, 7 being the highest)

Source | Court upholds Texas law that would require tech companies to allow hate speech, abuse and misinformation on their platforms