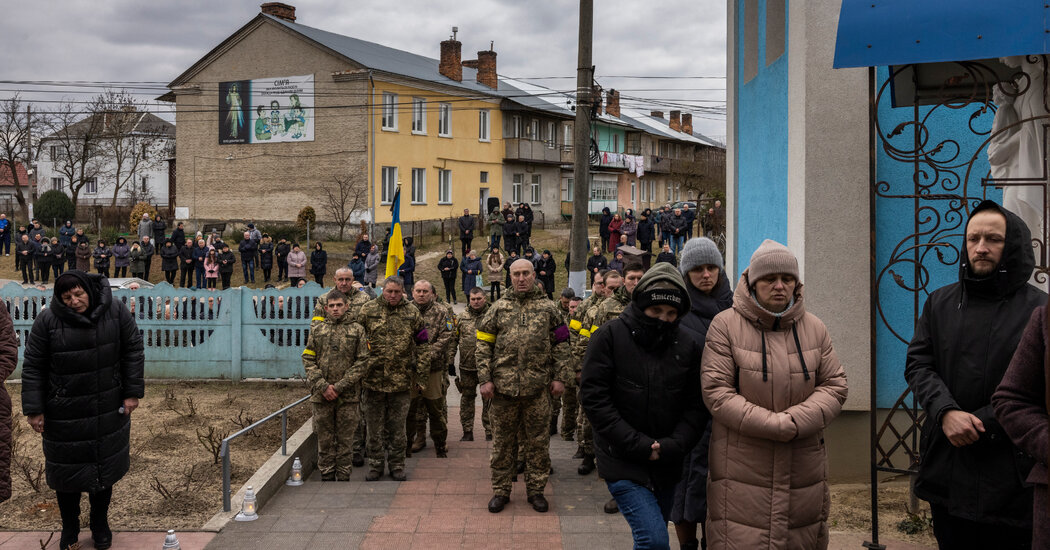 LVIV, Ukraine — Trapped in his apartment on the outskirts of Kiev during fierce battles over the weekend, famed Ukrainian poet Oleksandr Irvanets has composed a few lines that sum up the national mood.

“I cry out to the whole world,” he wrote in a short poem posted online by his fans, who have since lost contact with the writer and feared he had fallen behind Russian lines. “I won’t forgive anyone!”

It is a deep and boiling bitterness for President Vladimir V. Putin, his army and his government. But the Ukrainians aren’t giving ordinary Russians a free pass either, calling them accomplices in years of political passivity. The hatred is expressed by mothers in bomb shelters, by volunteers preparing to fight on the front lines, by intellectuals and artists.

The emotion is so powerful that it could not be appeased even by an Orthodox religious feast on Sunday intended to encourage forgiveness before Lent. Called Forgiveness Sunday, the holiday is recognized in the Russian and Ukrainian Orthodox churches.

Billboards were put up along the roads in gigantic capital letters, telling Russians in foul language to get out. Social media posts in spaces often shared by Russians and Ukrainians have been flooded with furious comments.

Some Ukrainians posted photos of people killed in the military assault in Russian chat rooms on the Telegram app. They let off steam by writing on the review pages of Moscow restaurant websites.

And they mocked the Russians in scathing terms to complain about the difficulties of banking transactions or the collapse of the ruble because of international sanctions.

“Damn, what’s wrong with Apple Pay?” Stanislav Bobrytsky, a Ukrainian computer programmer also caught up in the fighting around the capital, Kiev, wrote sarcastically about how Russians react to war. “I can’t afford a latte at my favorite cafe.”

Mr. Putin is the target of much of the unbridled resentment of Ukrainians.

The authoritarian ruler is to blame, almost all Ukrainians agree. But the frustration also extends more broadly to Russian society.

Many Ukrainians blame Russians for increasingly accepting the middle-class comfort offered by the country’s oil wealth in return for refusing to resist the limits of their freedoms. They blame millions of Russians, who Ukrainians say have abandoned post-Soviet dreams of freedom and openness to the West, of allowing the war.

“Are your iPhones okay?” another Ukrainian writer, Andriy Bondar, asked Russians on his Facebook page, after a sparsely attended anti-war rally in Moscow that was broken up by riot police. “We are very worried about you. It’s so cruel that they use rubber batons, those terrible riot police.

On Sunday, Ukrainian President Volodymyr Zelensky also called on Russians to demonstrate for themselves as much as for Ukrainians.

“Don’t miss this opportunity,” he said in comments directed at Russians.

“Citizens of Russia, for you this is a struggle not only for peace in Ukraine, this is a struggle for your country, for the best that was there, for the freedom you saw, for prosperity that you felt,” he said. added. “If you are silent now, then only your poverty will speak for you later, and only repression will respond. Don’t be silent!”

Mr. Zelensky did not hesitate to say what he thought of the Russian army.

“We will not forgive shooting at unarmed people,” he said.

There were virtually no anti-war demonstrations in Russia before the conflict began, although small protests have been held in recent days. Most of the participants were arrested.

Yuri Makarov, editor-in-chief of Ukraine’s National Broadcasting Corporation and head of a national literature and arts awards committee, said the war had created a deep rift between Ukrainian and Russian societies that will be difficult to heal. . The Russians, he said, have become the “collective enemies” of the Ukrainians.

A modicum of popular support allows fighting, he said.

“Orders to shell the residential areas of Mariupol, Kharkiv and Zhytomyr were given by specific colonels, captains and second lieutenants, not by Putin or Shoigu,” he said, referring to the Russian president and to his Minister of Defence, Sergei K. Shoigu. . “It’s their choice and their responsibility,” he added.

Russo-Ukrainian war: what you need to know

Demonstrations in Russia. Amid anti-war rallies across Russia, police said more than 3,000 people were arrested on Sunday, the highest national total in a single day of protest in recent memory. An activist group that tracks arrests reported detentions in 49 different Russian cities.

“As for the Russians, I’m not interested in their motivation now. They, except for a few, were quite comfortable in total dictatorship,” he added.

Olha Koba, a psychologist in Kiev, said that “anger and hatred in this situation is a normal reaction and important to validate”. But it’s important to channel it into something useful, she said, like making firebombs out of empty bottles.

“When people are happy about the death of Russian soldiers, it’s explainable,” she said. “There is a subconscious understanding that this soldier will no longer be able to kill his loved ones.”

Mr Irvanets, the poet who sent his bittersweet composition to friends over the weekend, wrote that he had composed the lines in ‘a city shattered by missiles’, and he referred to the upcoming holidays Sunday.

But per Forgiveness Sunday, his fans were writing on social media that he hadn’t been in touch and they feared something had happened to him.

“I will never forgive Russia,” wrote the poet.

Most hate crime charges in New York dropped before sentencing