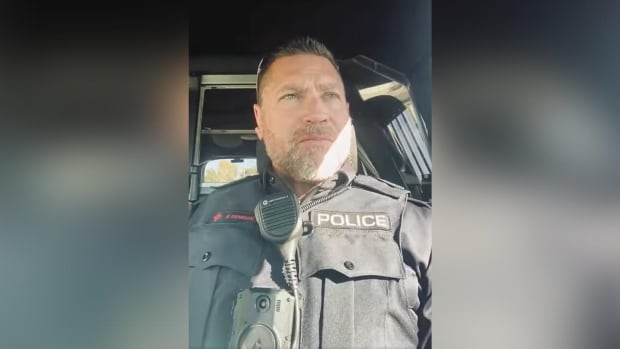 A former member of the Calgary Police Hate Crimes Unit posted a now-viral video comparing the city’s vaccination policy to the Holocaust.

The officer is currently suspended with pay, according to Calgary police.

In a 10 minute video, a const. Brian Denison compares the vaccination status to the genocide that killed millions of people.

â€œThose who are vaccinated, a lot of them look down on us who are not vaccinated and that kicks off the two tier system,â€ Denison said.

He says it is reminiscent of “the world war that Hitler was waging against the Jews.”

“He slowly but surely took away the rights, the privileges, all the things that people find useful in life, he took them away from them, and then he was able to demonize them.”

In the video, recorded in September, Denison says he’s been an officer for 24 years.

In a declaration earlier this year, B’nai Brith Canada, a Jewish human rights organization, said it was disgusted and concerned by a number of recent incidents in which the memory of the Holocaust has been tarnished by COVID-19 protesters, especially in Calgary.

â€œThe abuse of Holocaust memory to serve a toxic and conspiratorial agenda must stop,â€ Michael Mostyn, CEO of B’nai Brith Canada, said in the statement.

â€œThere is room for a healthy debate in Canadian society on how to fight COVID-19, but the cheap use of Holocaust imagery is horrific and beyond pallor. “

Across Canada, some protesters called public health orders genocide, wore yellow stars that Jews were forced to wear in Nazi-occupied Europe, and even attended protests displaying pictures of Anne Frank, the Jewish teenager who died in a Nazi concentration camp and whose newspapers were published posthumously and read around the world.

In an emailed statement, Calgary police said they were aware of the video. They said Denison was being relieved of his duties with pay for failing to adhere to the organization’s COVID-19 vaccination policy.

They say the professional standards section is investigating and the SPC is seeking exoneration from unpaid duty under the provisions of the Alberta Police Act.

“We recognize and share the disappointment of the Jewish community over the comments made in the video,” the statement said.

“We respect our employees’ decision to be vaccinated. We value inclusiveness and collaboration in our workplace and in doing so, we offer the rapid test program for our employees who are not vaccinated, for various reasons. . ”