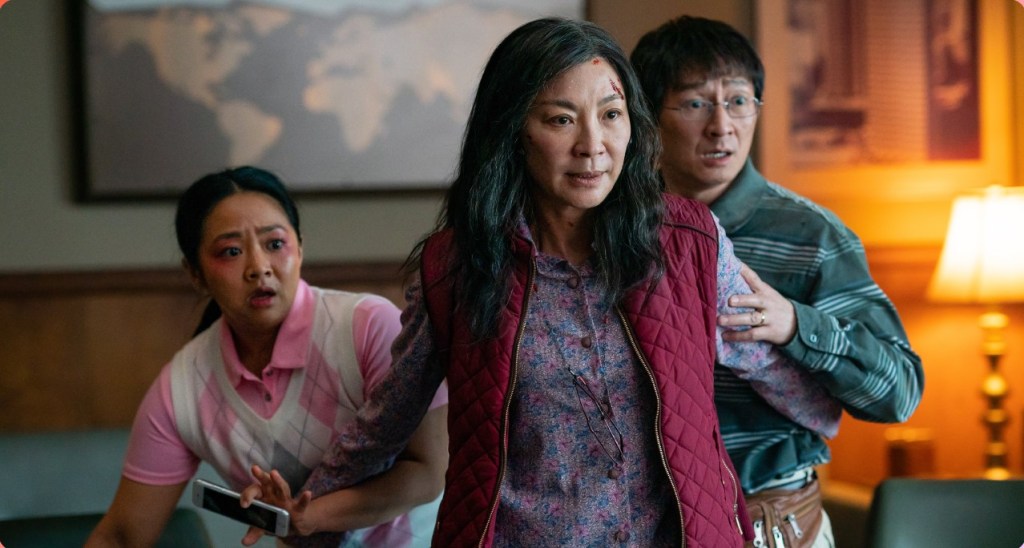 “Everything Everywhere” is insanely good

Dear Reader, Oh, you’re going to have a hell of a ball this weekend. Not only is there a second season of “Bridgerton” dropping Friday on Netflix, there’s a superb, elegantly crafted eight-part Apple TV+ series based on the beloved novel “Pachinko” by Min Jin Lee.

Want to show your face in theaters instead? Oh, you lucky pixie, you. There’s the brilliant and crazy metaverse “Everything Everywhere All at Once” with the divine Michelle Yeoh and a hilarious Jamie Lee Curtis.

Here is our roundup.

“Everything, everywhere, all at once”: I’ve seen many, perhaps too many movies in my time, but rarely have I seen something happen on screen that’s as crazy and wildly creative as the ingenious cinematic cipher of Daniel Kwan and Daniel Scheinert. Michelle Yeoh is triumphant as Evelyn Wang, a depressed, cash-strapped LA laundromat owner whose life is stuck on the same old spin cycle. Ready to serve her husband/co-owner’s (a lovable Ke Huy Quan) divorce papers, Evelyn’s fate changes when she goes to the IRS and meets a fiercely old-fashioned and rushed nightmare Deirdre Beaubeirda (Jamie Lee Curtis, in a go-for-broken performance that should earn him an Oscar), an agent annoyed by the dodgy receipts Wang presents to him. Add to this wacky assembly Wang’s disapproving lesbian daughter, Joy (Stephanie Hsu), and a path to a new dimension and you’re in for a wacky mashup of a superhero/sci-fi/family drama that’s joyfully unpredictable. But there’s a purpose to all this madness, and the Daniels are in total control even when you think they may have lost their grip. There’s depth and empowerment here, as well as unforgettable performances. In short, it’s great, and I’m dying to see it again. Details: 4 stars or 4; in theaters March 25.

“Pachinko”: With so many streaming series to choose from, it’s hard to be discerning. Here is the one to watch first. Apple TV+ continues to assert its position as the streamer that delivers quality over quantity in 2022. “Pachinko” is a stunning, bold and ambitious eight-part adaptation of Min Jin Lee’s epic novel about generations of a Korean family who encounter adversity, racism and tragedy in the aftermath of the Japanese occupation.

The production values ​​are top notch, from the sets, to the costumes, to the recreations of what 20th century Korea/Japan/America looked like. “Pachinko” tells a multi-tiered, multi-pronged story that jumps from generation to generation and period to period. This twist is handled with confidence and agility by its directors – the talented duo of Kogonada (“After Yang”) and Justin Chon (“Blue Bayou”). Each episode is a highly cinematic and emotional experience, often leaving you in tears, especially when depicting the fallout from the occupation of Korea and the clan’s move to Japan.

The complex emotions and situations combined with a large cast of characters require an attentive audience, but this is one of the most impressive series to date on any streamer. It also instills hope that we might encounter these characters again. Details: 4 stars; Available March 25 on Apple TV+.

“Bridgerton Season 2”: Hearts were indeed crushed when it was announced that hunky Regé-Jean Page would not be reprising his role as the Duke for the second season of the sexy regency romance Shondaland. The really good news, however, is that this second outing, also based on Julia Quinn’s bodice rippers, is quite the pip of the period, a playful if not equally steamy outing – or at least that’s what the first three episodes hinted, with a mischievous smile.

In this adventure, the historic love connection switches to Daphne Bridgerton’s (Phoebe Dynevor) unengaged brother, Anthony (a delightful Jonathan Bailey, who has a knack for comedic timing). He is looking for a suitable mate and many are looking for that honor, including Edwina Sharma (Charithra Chandran). But Edwina’s older sister, Kate, isn’t impressed with Anthony at all, and the two argue until the romantic sparks start to fly. It’s their love-hate-love exchanges that give “Bridgerton” more flair, along with snarky dialogue and more supporting character development, including the delightful Penelope (Nicola Coughlan) whose alter ego cooks up the gossip. , and Anthony’s independent sister, Eloise. (Claudia Jessy). Everything is done with a lot of spirit, in front of and behind the camera. Details: 3 stars; Available March 25 on Netflix.

“All my friends hate me”: In director Andrew Gaynord’s black comedy, an unwitting Pete (co-screenwriter Tom Stourton) decides to celebrate his 31st birthday at some sort of college reunion held at one of his friend’s remote British family estates. He learns to regret it. From a strange encounter along the way to a lackluster welcome once you arrive at your destination, there’s something wrong with Pete who often becomes the object of teasing and torment. Gaynord’s bizarre feature is a harrowing comedy about alienation that might even give you pause to get back together with the old gang you hung out with. The screenplay, co-written by Tom Palmer, makes it an unforgettable test of endurance. Details: 3 stars; in select theaters and available to rent online March 25.

“Ahed’s Knee”: You can always count on Israeli filmmaker Nadav Lapid to deliver provocative drama that defies categorization or summary. In this follow-up to his 2019 indie sensation ‘Synonyms’, frustrated filmmaker Y (Avshalom Pollak) takes aim at government censors for cracking down on what he can touch on during Q&A after the screening of his latest feature. footage. He is already emotionally unstable due to his mother’s fragile health and he is eager to fight. His visceral reactions affect the young culture minister Yahalom (Nur Fibak). Lapid specializes in allowing prickly characters to let off steam and reveal the intricacies of a land and its people. Details: 3 stars; in select theaters March 25.

“So cold the river”: Novelist Michael Koryta is seeing a number of his thrillers turn into movies. This adaptation of his 2010 supernatural page-turner eclipses the one that preceded it, “Those Who Wish Me Dead” starring Angelina Jolie. Director Paul Shoulberg generously alters the elements of the novel, turning the main character from a guy into a documentary filmmaker Erica Shaw (an outstanding Bethany Joy Lenz). Erica finds herself entangled in the dark and violent history of a small town that was heavily under the influence of billionaire citizen Campbell Bradford. Hired to make a documentary about the life of a dying Campbell, Erica comes into possession of a Stephen King-like relic filled with a powerful liquid. “So Cold the River” is kind of ridiculous, but it’s also pretty exciting and is armed with a spooky, spooky vibe. Details: 3 stars; in select theaters March 25; available to rent online March 29.

“100 Years of Men in Love – The Accidental Collection”: In Here TV’s hour-long documentary, an unexpected pastime of finding so many vintage photos – from the 1850s to the 1950s – of male couples in love turns into an obsession and a reflection of how same-sex couples slyly suggested they were together. Written and directed by David Millbern, “100 Years of Men in Love” sprinkles commentary from collectors Hugh Nini and Neal Treadwell, but allows the images to tell the story, and it’s instructive to behold. Details: 2½ stars; available March 25 on HereTV.