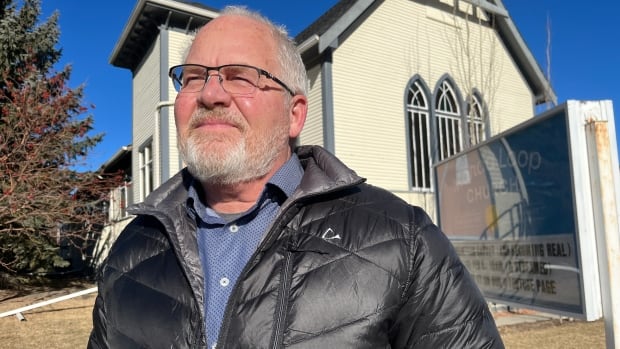 The pastor of a small church in southwest Calgary is holding firm on COVID demands despite a biblical tsunami of hate that has repeatedly filled the church’s voicemail inbox.

When the global pandemic hit about two years ago, Pastor John Van Sloten of Marda Loop Church decided to go above and beyond provincial COVID safety protocols, despite exemptions granted by the province, so that his congregation can have confidence in a safe and healthy environment.

“People who come to our services have expressed their gratitude that we have a policy in place where they know everyone in space is as safe as possible,” Van Sloten told the Calgary Eyeopener Monday.

“But for some others, there are a few, people I love very much, who chose not to get vaccinated.”

It weighs on him.

“Excluding others for any reason is hard on the heart.”

But there is a third group of people that Van Sloten had to deal with.

“Much more vitriol from the wider fringe Christian community, from those who cling to conspiracy theories or the view that science is against God. Our voicemail filled up again and again with people yelling at us. I got hundreds and hundreds of emails and social media comments calling us and me Satan, offspring of Satan,” he explained.

“We’re just a small church in Calgary at Marda Loop. I didn’t know we would get so much attention,” he said, trying to find some humor in the situation.

And it is this third group, the extremists, that worries a political scientist at Mount Royal University.

“They make it look like there are more of them than they actually are,” Lori Williams, associate professor of political studies, told CBC News in a video interview.

“And because their behavior is being rewarded with publicity, fundraising, and politicians appearing to give in to some of their concerns, there are significant incentives for their behavior to continue.”

Williams says the irony is that there are legitimate concerns swirling around, but they’re drowned out.

“I think some people have legitimate questions about that,” Williams said.

“Organizers of these protests include Pat King, Tamara Lich, people involved in the yellow vests, the carbon tax convoy that crossed the country. They do not represent the majority of Canadians. While there is sympathy among many Canadians or Albertans for their general frustration, they cause even more frustration.

“If your concern is freedom of movement or interruptions to the supply line, protests make all of those things worse. Protesters are restricting the freedom of people who might have had more sympathy if they weren’t so intransigent in their demands.”

Meanwhile, Van Sloten says his church will continue to do what is necessary for the safety of all worshippers.

“We want to love our neighbors. We want to follow the majority of civic-minded Calgarians and create the safest space possible,” he said, adding that a little patience goes a long way.

With files from the Calgary Eyeopener