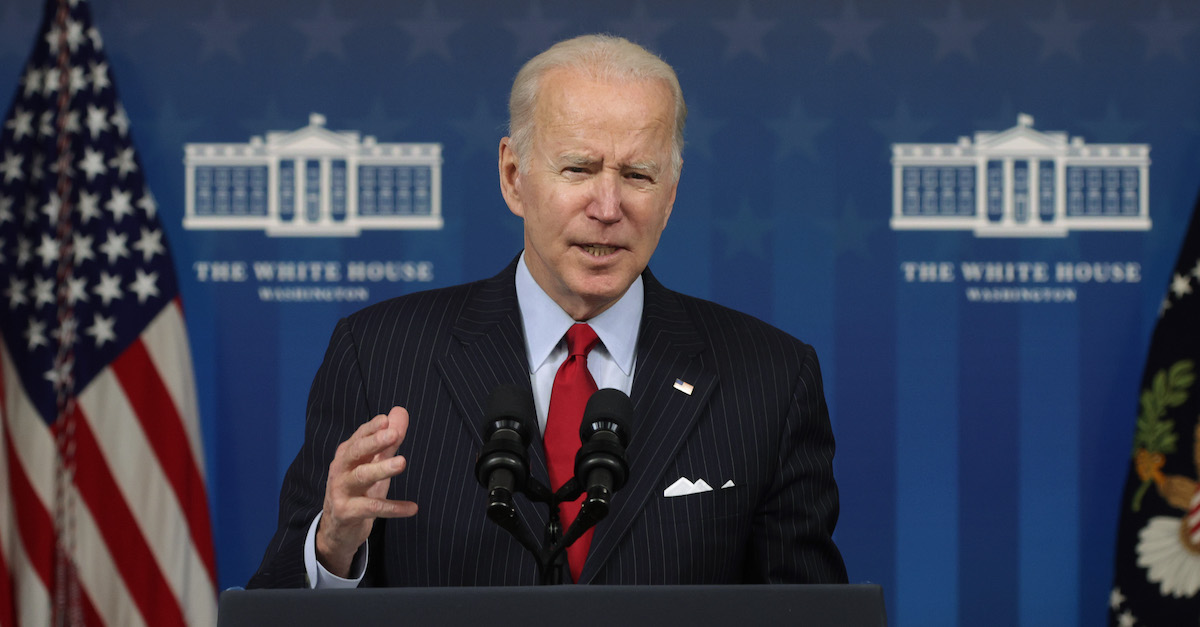 President Joe biden reacted on Wednesday to guilty verdicts in a Georgia state courtroom against the three defendants who are now convicted of murder Ahmaud Arbery. Biden said the “fight for racial justice” was far from over and said Americans should be committed to a future “where no one fears violence because of the color of their skin.” Arbery was black; the three accused are white.

Biden released the comments despite ongoing federal hate crime prosecutions against the same three defendants on charges directly related to Arbery’s race. Travis McMichael, his father Greg McMichael, and neighbor William “Roddie” Bryan still face one count of rights violation and one count of attempted kidnapping in federal court. The McMichaels are also separately charged with “using, carrying and brandishing – and in Travis’s case, discharging – a firearm during and in connection with a violent crime,” the DOJ said earlier this morning. year.

The federal indictment is entirely separate and adds to the conviction in state court on Wednesday.

The DOJ explained the indictment this way when it was released in late April:

Counts one and two of the indictment allege that the defendants used force and threats of force to intimidate and obstruct Arbery’s right to use a public road because of his race. Specifically, Count One of the Indictment alleges that while Arbery was running on a public street in the Satilla Shores neighborhood of Brunswick, Ga., Travis and Gregory McMichael armed themselves with firearms, were got into a truck and chased Arbery through the neighborhood’s public streets, yelling at him, using their truck to cut him off, and threatening him with guns. The charge also alleges that the offense resulted in Arbery’s death. Count Two alleges that William “Roddie” Bryan joined in the pursuit and used his truck to cut off Arbery’s road.

In addition to the hate crime charges, Count Three alleges that the three defendants attempted to illegally seize and confine Arbery by chasing him in their trucks for the purpose of restraining him, restricting his free movement, locking him up and to detain him against his will, and prevent his escape. Counts Four and Five allege that during the crime of violence imputed to Count One, Travis used, carried, brandished and discharged a Remington shotgun, and Gregory used, carried and brandished a .357 Magnum revolver.

Biden’s full statement released on Wednesday is below:

The murder of Ahmaud Arbery – which the world witnessed on video – is a devastating reminder of how far we must go in the fight for racial justice in this country. Mr. Arbery is expected to be here today to celebrate the holidays with his mother, Wanda Cooper Jones, and father, Marcus Arbery. Nothing can bring Mr. Arbery back to his family and community, but the verdict ensures those who committed this horrific crime will be punished.

While guilty verdicts reflect that our justice system is doing its job, that alone is not enough. Instead, we must recommit ourselves to building a future of unity and shared strength, where no one fears violence because of the color of their skin. My administration will continue to do the hard work to ensure that equal justice before the law is not just a phrase set in stone above the Supreme Court, but a reality for all Americans.

Biden’s comments on high-profile cases during his first year as president have raised eyebrows in the past. In April, the president commented on the case against Derek chauvin in the murder of George Floyd, Jr., as the jury deliberates on Chauvin’s fate. The comments came despite the punishments of Pierre Cahill, Chauvin’s trial judge, was targeting other politicians, such as Rep. Maxine Waters (D-Calif.), That such comments could potentially reach jurors’ ears.

“I wish elected officials would stop talking about this matter, especially in a way that is disrespectful of the rule of law, the judiciary and our function,” Cahill said at the time. “I think if they want to give their opinion, they should do so in a respectful manner and in accordance with their oath to the Constitution.”

White House press secretary Jen psaki suggested that Biden’s comments on the Chauvin case were unlikely to cause any harm as the jury was sequestered. While many legal experts ripped apart Biden’s verbosity about the closely watched decision, most admitted it was unlikely to result in an appealable issue.

Biden also ignored constitutional questions at press conferences, and the two Kyle Rittenhouse and the Rittenhouse family called the president for discussing the teenager’s case long before his jury sat. After Rittenhouse’s acquittal, Biden was criticized for saying he was “angry and concerned” about the verdict even as he said “we have to admit the jury has spoken.”

The federal case against the McMichaels and Bryans gained little ground outside of discovery motions and other ministerial matters. The case has been significantly delayed due to the ongoing trial of the defendants in state court.

Federal affairs are scheduled for a hearing on Dec. 20, the record says.

Do you have a tip we should know? [emailÂ protected]