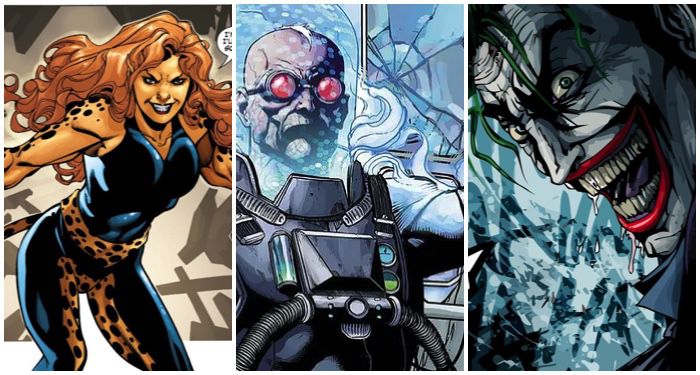 DC Comics is filled with wonderful heroes and terrifying villains. But what makes DC’s best villains? Is it raw power? The possibility of selling comics? Number of appearances? For each comic book reader, there are different criteria for “best” and a different ranking. While some prefer their cosmically powered villains, others prefer the quiet insidious. And there’s a wide range of villains between those two extremes.

So how did I choose this list? Well, it’s certainly not about raw power, although the villains on this list aren’t powerless. For me, it’s about how compelling they are as characters and what they bring out in the heroes they face. Any villain can throw a punch or shoot a gun, but do they get inside our heroes’ heads? Do they embody the flaws and weaknesses of our heroic protagonists? Do they reflect something horrifying in our own society, written boldly on the page?

These characters, to me, are DC’s best villains. They do more than smash their way through towns and civilians. They dance through our dreams and nightmares long after we’ve moved on, confusing us with their machinations and metaphors. So here they are, DC’s best villains.

He might be the most tragic and relatable of Batman’s incredible rogues gallery. Victor Fries was hard at work trying to save his terminally ill wife when a cryogenic accident occurred. His body temperature was lowered to subzero levels, requiring a cryogenic suit to survive. It doesn’t matter if he robs a bank or helps another villain, it’s always in the hope of finding a cure for his beloved wife. No other villain makes me mourn his lot in life quite like Mr. Freeze.

Sign up to The Stack to receive the best Book Riot Comic articles, selected for you.

Thank you for signing up! Keep an eye on your inbox.

By signing up, you agree to our terms of use

Created in Batman: The Animated Series as Joker’s sidekick, Dr. Harleen Quinzel became so much more. She outgrew her twisted Stockholm Syndrome, forging her own path as a villain independent of her background. She found her own voice as well as success as one of the prominent characters in the DC Extended Universe and animated shows. She is also very funny.

While I don’t like villains who are merely impersonators of the heroes they outwit, Reverse Flash has become Flash’s most insidious villain. His copycat power also means he shows how access to the Speed ​​Force can be used for nefarious purposes, which goes to show how amazing Flash is for choosing to do good in the world with it. his power.

Bad? Hero? Part of what makes Catwoman so compelling is how she walked that line, falling more into the antihero category than anything else. She started out as a simple cat burglar who was too on-brand, and grew into a regular lover, ally, and occasional foil to Batman. Every time she appears in a story, you always know it’s going to get more complicated.

Black Adam is about to make his big screen turn, and for good reason. He’s a regular villain for Shazam, wielding equivalent powers that give any hero a run for their money. He’s also a leader of his own country, defending his people with those incredible powers, which sometimes land him with our heroes as often as he fights them. No matter which side he’s on, Black Adam is a powerhouse.

DC’s best villains are often the main antagonists of DC’s best heroes. In this case, Cheetah is Wonder Woman’s most constant enemy. Imbued with cat-like reflexes, heightened speed and strength, and sharp claws, Cheetah is selfish and ambitious, the perfect counterpoint to Wonder Woman’s selflessness and heroism. Initially focused on obtaining the Lasso of Truth, Cheetah transitioned into an obsession with beating Wonder Woman purely for her own ego, another stark contrast to DC’s greatest heroine.

Without a doubt, Sinestro is Green Lantern’s greatest enemy. Any of them. He was one of Hal Jordan’s mentors, a leader of the Green Lantern Corps, and a great hero in his own right. He was exactly the kind of person Hal wanted to be. So when Sinestro began prioritizing power over selflessness, fear over willpower, his fall from grace was distant and devastating. Sinestro is a mirror of what any Green Lantern could become without vigilance or awareness.

While some of DC’s best villains have incredible superpowers, others wield tremendous and very human power. Amanda Waller is such a person. She pulls the strings of government, leads the Suicide Squad, and generally gives people chills every time she pops up on the page. When you see Amanda Waller, you always know there’s a bigger, darker plan that our heroes aren’t even aware of.

Deathstroke the Terminator. Inspiration (sort of) for Deadpool. Master assassin. Expert tactician. Possibly the best melee fighter in the entire DC Universe. A frequent adversary of the Teen Titans, the Outsiders, and even Batman, Deathstroke is always a tough fight. He is ruthless and often works for a greater evil that lurks in the shadows. Can he beat Batman in a one-on-one fight? I don’t think the DC editors will ever give us the answer.

This is where people start getting mad at me. Yes, Joker is Batman’s original villain, his greatest enemy, his antithesis. Its ever-changing identity makes it unpredictable and a perfect palette for any writer. They can adapt him to virtually any situation, change his personality from issue to issue, and still torture the entire Bat family. His persistent desire to play with, but never kill, Batman is fascinating. His need to torture and kill Robins is horrifying. So why isn’t it number 1? Maybe because we should be beyond the wickedness of mental illness.

Superman’s indomitable nemesis has been around for a long time. He worries that superpowered people like Superman will weaken humanity, making us depend on their help instead of defending ourselves. Wealthy and genial, he takes this genuine concern and twists it to Machiavellian ends, often willing to sacrifice innocent civilians just to prove himself right. He’s a mirror of the worst in humanity, making him one of DC’s best villains.

If there’s a devil in the DC Universe, a boogeyman from the stars, it’s Darkseid. Ruling Apokolips with terror and brutality, he is a frequent and often overwhelming foe to Superman, the Justice League, the Green Lantern Corps, and the entire universe. He is a rogue member of the New Gods, an entire superpowered race meant to represent our highest ideals, corrupted and turned against all living beings. He’s evil incarnate and DC’s best villain.

Next time you visit your local comic book store, not sure what to buy, watch out for these bad guys. No matter who they fight, these are the best DC villains to read.